Now on YouTube. This program Scott Teeters chats with Bo Long, the creator of a fascinating enterprise called Orgonia.

So what in the world is this natural energy called orgonite and why would you be interested?

Bo Long  tells us about Orgone Energy. Bo is in the "Orgone Devices" business. The term “Orgone” was coined by Wilhelm Reich in the 1930s and basically means, “Life Force.” It was conceived as the anti-entropic principle of the universe, a creative substratum in all of nature comparable to Franz Mesmer’s “animal magnetism.” Mesmer’s work went on to be called, “Hypnosis” by Scottish Dr. James Braid, it also lead to the expression “to be Mesmerized” or “to be in a trance.”

“May the Force be with you!”

Regardless of the terminology and the philosophy of Orgone or any of its varied names, it turns out 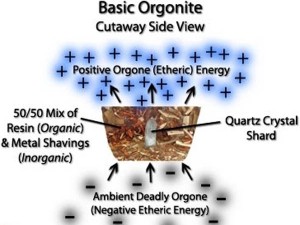 that when you conmbine certain organic and inorganic materials in a particular way, they form a symbiotic relationship and function like a wireless transmitter of cleaned up energy!

In the last 100 or so years since we started transmitting radio waves through the air, we have literally filled our world with Electromagnetic Smog. We started out with radio, radar, then television waves, then moved the radio frequency range up to the FM range, now we have, Gwen towers and cell phone towers everywhere, and we even have microwave ovens and Wi-Fi transmitting devices in our homes. We are literally SWIMMING in electromagnetic pollution that we can not see, smell, or taste.

BUT! The next time the power goes out due to an electrical storm or some other event, stop and notice how “things feel different.” That’s the way things used to be ALL THE TIME.

Orgone Devices can help mitigate the drag of Electro-Smog and Bo Long joins us to tell us all about these amazing little devices!

This from Wikipedia about Wilhem Reich on his discovery of the orgone energy in the 1920's:

After his migration to the US, Reich began to speculate about biological development and evolution, and then branched out into much broader speculations about the nature of the universe.[4] This led him to the conception of "bions": self-luminescent sub-cellular vesicles that he believed were observable in decaying materials, and presumably present universally. Initially he thought of bions as electrodynamic or radioactive entities, as had the Ukrainian biologist Alexander Gurwitsch, but later came to the conclusion that he had discovered an entirely unknown but measurable force, which he then named "orgone",[4] a pseudo-Greek formation probably from org- "impulse, excitement" as in org-asm, plus -one as in ozone (the Greek neutral participle, virtually *ὄργον, gen.: *ὄργοντος).

Bo Long recently discovered this substance for himself quite by accident  when looking up a few topics on YouTube.

The online literature about orgonite suggests that it somehow overrides or purges the body of chaotic vibrations that accumulate with special virulence in the age of electronic communication with powerful cell phone towers, radar towers, and radio towers poking up everywhere now. With a cell phone in every pocket electrosmog has become pandemic. Mind you, the idea of electrosmog being such a problem for bioorganisms had been for me prior to orgonite just an idea. I had no way of personally verifying that probably because the onset of the smog had been gradual enough as the electronic age burgeoned that like the frog in the slowly heated pot of water I didn't know I had been boiled, but if what happened to me during my first orgonite experience had really been a lifting of electrostress then suddenly my eyes had been opened. I had been under an influence that was much stronger than I had realized.

Bo Lung became such a believer that he developed his own "Orgonia" to share with the world. And this is his story. Listen in and enjoy.

Before Bo Long started his company, Orgonia, he was a furniture maker in the Ozarks. Now his passion and business, Orgonia is a single man operation started in the summer of 2013. After 5 years of experimentation and feedback, he now makes orgonite with unique additives that greatly boost the power and psychological warmth of this amazing material.  His "Customer Testimonials"  tell the story. The Orgonia production shop is part of his little farmette near Fayetteville in the beautiful Ozark hills of Northwest Arkansas.