Now on YouTube. Mark McCandlish is back with us this evening. In previous visits, Mark has talked mostly about UFOs and flying machines. Mark is a brilliant and talented technical illustrator and artist. You can see some of his work on the samples pages of his website, www.MarkMcCandlish.com. His work is magnificent.

Mark is a researcher and whistle blower. One of his topics is the cover up of chemtrails and geoengineering. There’s a subtle characteristic of all of us technical illustrators, and it’s an insatiable curiosity for “how things work.” It’s a mindset that maps over into other arenas of life – we just want to know, “why is that – what’s that all about – how does that work.”

After Mark's recent visit with FarOutRadio, Mark and I were talking about geoengineering and weather modification. The two go hand-in-hand. And the most observable part of geo engineering are chemtrails. Unless you live in a seriously rural area, you see the lines in the sky all the time. So much so that people think they’re “normal” and pass them off as “con-trails” or “vapor-trails.”

No folks, "condensation trails," “con-trails,” or “vapor-trails” don’t leave what looks like a chalk line that runs from horizon to horizon that then spreads out into a grayish cloud. That is a CHEM-trail. Independent research has shown that the material is mostly aluminum and barium, and a few other goodies (nasties).

This is NOT “conspiracy theory” because in public forums on the topic of geoengineering, the 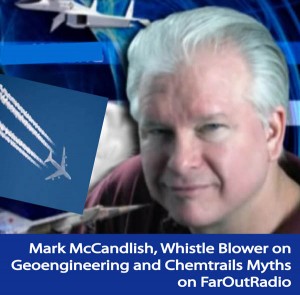 I’ll give you a hint as to the “why” part. There’s no SINGLE answer. There are several.

Michael Murphy’s part three of his film series will be titled, “WHO In The World Is Spraying.” I don’t know when part three will be out, but there’s a YouTube video trailer that you can watch.

Please njoy the interview and share this with your friends who need to know about geoengineering and chemtrails and what it means to their lives.

You can enjoy Mark McCandlish’s beautiful work and purchase prints of his art, including his WW II fighters, F-16s, B-29s, the Space Station, ARV cut-away and more at, MarkMcCandlish.com/.

Mark has been an informative guest on FarOutRadio and you can experience these past interviews on our YouTube Channel Here.

Mark McCandlish is an internationally-recognized artist who has specialized in aviation and conceptual art within the defense and aerospace industries. He is a well respected researcher and ufo and aeronautics whistle blower who speaks at many conferences. His first UFO sighting occurred at Westover Air Force Base in the State of Massachusetts, in the Winter of 1966 and he observed the craft through an 80 power telescope for about ten minutes before it accelerated out of sight at an extreme velocity. Mr. McCandlish has spent most of his life trying to discover the science that would make such incredible performance possible, and he believes there is a plausible answer to interstellar flight without violating the currently-accepted laws of physics. He feels the sequestration of this technology has provided certain organizations tremendous leverage in world politics, finance and international conflicts over the past five decades.http://www.markmccandlish.com