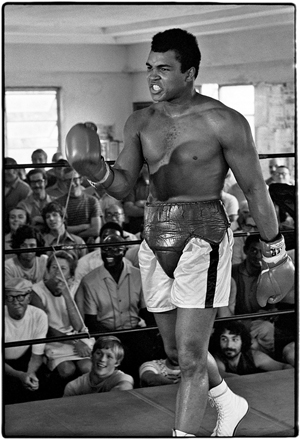 Now on YouTube. Al Satterwhite’s soon to be self-published photo journalism book, “Muhammad Ali – The Comeback”, Al’s photographic documentation of the great fighter is up for discussion this program. Muhammad Ali,"The Greatest" is documented by the man with the photographic eye, Al Satterwhite.

Al Satterwhite is back with us this evening. He is a master photographer and was with us a while ago to talk with us about his then-new photography art book “Hunter S. Thompson, The Cozumel Diary.” Al’s master files of negatives are a virtual treasure trove of our times. Since then, Al has found a bundle of gems that he’s making into another special, limited edition photography art book.

The subject is, the one and only, The Greatest, Muhammad Ali.

Al has a Kickstarter project going to fund the book and you can see the promo video for the project by doing a Google search for “Al Satterwhite Ali” and the link should be at the top of the search results.

The book’s title is, “Muhammad Ali – The Comeback” and will feature Al’s rarely seen photos of Muhammad Ali, in his prime, as he was training in Miami Beach at the famous 5th Street Gym in the early 70s. Of course, Kick Starter is an online funding system, and if you would like to help Al with his project, you can do so on the Kick Starter page.

The funding project, as of this interview, has a few days to go and there are various special gifts for different levels of contributions. 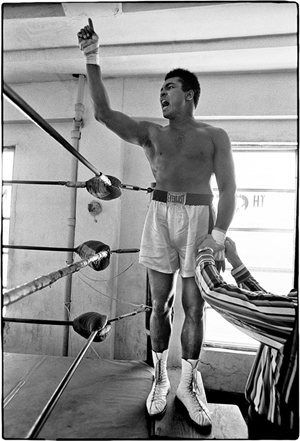 So, for our younger listeners, you might be wondering, why was Muhammad Ali so important that a special limited edition book would be produced? I was only 10 years old in 1964 when a young, brash, 1960 Olympic Gold Medal winner for boxing, Cassius Clay, won the World Heavyweight against ALL ODDS, defeating Sonny Liston (a frightfully tough boxer with the nickname, The Brown Bear)

It was stunning! Cassius Clay had electrified professional heavyweight boxing like no one before or since. He was like the Elvis Presley of boxing – a man with genuine charisma. But Cassius had a secret, he was a Muslim. The day after the Liston fight, he publically converted to the Nation of Islam and took the name Muhammad Ali, and explained his new name thusly, “Muhammad means” worthy of praise,” and Ali means, “most high.”

Three years later when he was drafted and declared himself a conscientious objector, Ali stated: "War is against the teachings of the Holy Qur'an. I'm not trying to dodge the draft. We are not supposed to take part in no wars unless declared by Allah or The Messenger. We don't take part in Christian wars or wars of any unbelievers." More succinctly and famously he said, "I ain't got no quarrel with them Viet Cong – no Viet Cong ever called me Nigger." 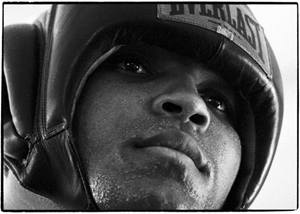 Upon his induction, he refused to step forward when his name was called – a felony crime. He was arrested and the next day, stripped of his title and license to fight. Two months later in a trial, after only 21 minutes of deliberation, he was found guilty. The Court of Appeals upheld the case and it went to The Supreme Court where it was finally overturned on June 28, 1971 by a unanimous 8-0 decision.

George Carlin had an amusing rap on Muhammad Ali’s situation. After Ali won his court case, George said, “He was  allowed back to work once again. He wasn’t for while, as you know, about 3-1/2 years they didn’t let him work. Of course he had an unusual job – beating people up. It’s a strange calling you know. 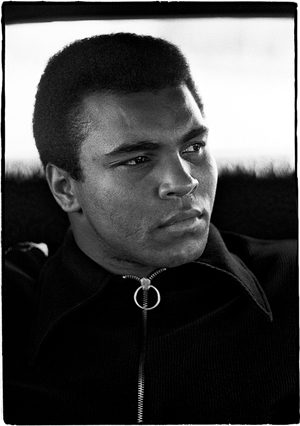 So, when Muhammad Ali made his comeback, it was a BIG DEAL. And Al Satterwhite was privileged to be able to capture this amazing man of the times.

Click HERE to go to KickStart to support this book's publication.

Al Satterwhite has been a professional photographer all of his adult life. His work has appeared in Automobile, Car & Driver, Fortune, Geo, Life, Look, Money, Newsweek, People, Playboy, Sports Illustrated, Time, Travel & Leisure and many, many other publications and books. His previous special, limited edition photography art book was an homage to his friend, Hunter S. Thompson, the famous 'Gonzo" journatlist. This photography art book is titled “Hunter S. Thompson, The Cozumel Diary."