Now on YouTube. Frank Joseph is back with us this program. Frank has been with us many times before. In his last visit on August 25th we talked about his book, “Before Atlantis” which is a fascinating look, way WAY back in history. Frank has authored at least 20 books about ancient history and he’s the former editor of Ancient American Magazine. He’s also written on the topics of WW I and WW II.

Frank is hard at work on a new book that will be out in the Spring of 2015 – “Atlantis and the Coming Ice Age". That is, IF we have a spring this coming April. Just last week weathermen were predicting “THE RETURN OF THE POLAR VORTEX!” Remember last winter when at one point during that harsh, harsh winter EVERY state in the union (except for Hawaii) had snow on the ground in some part of the state? 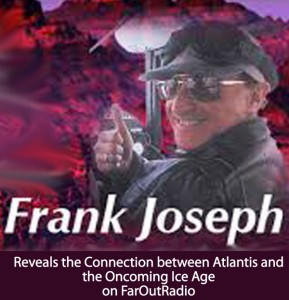 ge” and there are few other topics that are more polarizing. Supporters put down non-believers with the expression, “Climate Change Deniers.” Others say that the data does NOT support the “Global Warming/Climate Change” argument, and those that propagate this “belief” are just plain nuts! They say that

“Climate Change/Global Warming” is a cute story, and can get you an Academy Award, but it’s just a made up story.

If you do a Google search for “data supporting Climate Change” and “Global Warming/Climate Change is a fraud” you’ll find stacks of web pages supporting both sides. Of course the United Nations is firmly behind Global Warming/Climate Change and is poised to foist a global carbon tax on the planet as a method of “reducing our Carbon Footprint.” Just what everyone needs, MORE TAXES. And do we really trust the United Nations, considering that they have been completely ignoring the ecological disaster in Fukushima, Japan?

But back to the weather. Most of us remember in high school history class being taught about the last major Ice Age, when miles-thick glaciers covered all of Canada and as far south as southern Indiana. It’s hard to imagine! It’s also hard to imagine that The Ice Age wasn’t that far back into the past– only about 14,000 years ago. Frank Joseph has stitched together some inconvenient facts that have been known about for over 45 years, with a lineage of research that goes back to 1930!

So, are we due for another Ice Age? The last “Mini Ice Age, the “Maunder Minimum” that ran roughly from 1645 to 1715, was the stuff of medieval legends of astonishingly fierce winters! Let’s hope we don’t get there any time soon. We also hear Climate Change people are saying, “But the climate cools before it gets warm.” (if that makes any sense to you.) And then again, weathermen as of this month (October 2014) are saying, “The Polar Vortex is COMING BACK!” We’ll see.

In the mean time, Frank Joseph is with us – not as a prognosticator, but as a student of ancient history and inconvenient scientific research – the stuff that government-funded, university academic officials like to ignore. If that’s the case, then “WHO” are the “deniers”?

We have produced 8 programs in the last year or so with Frank Joseph that you can enjoy. Just visit the YouTube playlist at the bottom of this page.

His recent book to which he has contributed, Lost Secrets of the Gods, The Latest Evidence and Revelations On Ancient Astronauts, Precursor Cultures, and Secret Societies may be viewed and purchased on Amazon, HERE.

Frank Joseph is the author of twenty books about prehistory re-published in as many foreign languages, including "The Atlantis Encyclopedia", "Opening the Ark of the Covenant", and "Unearthing Ancient America". He was the editor-in-chief of "Ancient American" magazine since its debut in 1993 and now works as a correspondent for the magazine. Frank Joseph also writes on American History as well and is a frequent guest speaker at various metaphysical and archaeological societies in the U.S. and abroad.

Enjoy all of Frank Joseph's Previous Interviews on our FarOutRadio YouTube Channel Below: