Now on YouTube. Our guest, returning for another visit is author Von Braschler. Scott and Von discuss one of Von's favorite topics which is that of time travel. In his popular book, Seven Secrets of Time Travel, Von Braschler reveals how to break free from the physical world and travel through time and space via the energy body. He examines time, timelessness, and time travel from the viewpoint of mystics, shamanic dreamwalkers, and scientists, including Helena Blavatsky, C. W. Leadbeater, Albert Einstein, and Julian Barbour, as well as Hindu spiritual science.

Von was here just a month ago to tell us about his latest book “Confessions of a Reluctant Ghost Hunter: A Cautionary Tale of Encounters with Malevolent Entities and Other Disembodied Spirits”.

In this program we talk about Time Travel which is a hot topic in the realm of entertainment and books. But it usually focuses on the use of machines to move forward and back in time. Von's approach to Time Travel is INNER and he claims that we all can do it, and probably already have.

Author and journalist Von Braschler is a writer on the subjects of time, human consciousness, and energy healing. Von has lectured and led workshops throughout the US and the UK, and served as a faculty member at Omega Institute for Holistic Studies in Rhinebeck, New York. Von is a former newspaper and magazine editor; 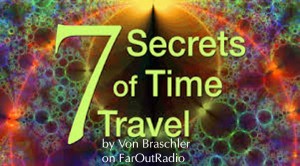 he writes and leads workshops in the areas of consciousness development.

All of Von Braschler's books can be found on his Amazon Page. Go here.