4 callers who had amazing Readings!!! 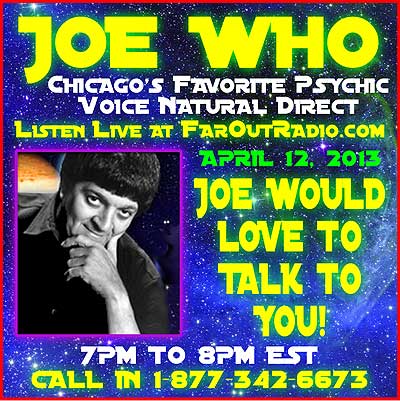 Our guest  is Joe Who.  Joe is a psychic with an unusual ability. He is a Voice Natural Direct. His psychic impressions come from “hearing” someone’s voice – not the “what” they are saying, but the vibrational quality of their voice, a highly unusual psychic skill. He has been voted, “Chicago’s Number One Psychic” for good reason and has now become Far Out Radio's Number One Psychic!

Joe realized he had this ability as a small child. He became aware that he was feeling the pain of the children that were being picked on by school yard bullies. His mother, intuitive herself, understood his talent and explained that it was a gift and that he should be quiet about it.

Upon graduating from college, Joe pursued a career in robotics engineering. At one point in his life in 1985, Joe just happened to be listening to the radio and heard a DJ ask for a street psychic to help find a lost item. The prize was tickets to a Genesis concert.

That was incentive enough so Joe called the station and told the screener, “"He lost his sunglasses," The screener said, "Well he always loses those, that's not a good guess.” Joe replied, "Then the only other thing it could be, is something he really didn't lose, not in the normal sense.” "Which is…?" asked the screener. "A gold cap – he swallowed a gold tooth cap, he didn't really lose it, it's just been accidentally swallowed.”

That started it. Before Joe knew it, his skill and fame as a psychic grew and he was on dozens of radio programs around the world. Joe still has a very busy schedule and has most recently been interviewed for a documentary.

We open up the lines for call ins so that Joe can be asked  questions about the caller's interests–financial future, career prospects, relationship issues, whatever our listeners have in mind. These programs with Joe and Scott are just like listening to two old friends chat about the state of the world at the kitchen table. Won't you join us and listen in?

Click here for Joe's website, JoeWhoRadio.com for more information about Joe and his readings.Far Out Radio with Scott Teeters is broadcast Live from 7pm to 8pm Eastern Time and 4pm to 5pm Pacific Time.