Xaviant Haze talks about his new book, “Elvis Is Alive – The Real Conspiracy” with Scott Teeters, on Far Out Radio.
Xaviant’s interest in the life and death of Elvis started just over two years ago when he came upon the strange story, of how a suicide in Miami came to be the catalyst that would ignite the career, of the most electrifying entertainer ever – Elvis Presley.
Xaviant flushed out the story and on May 20, 2013 he published, “How a Suicide In Miami Gave Birth to “Heartbreak Hotel” and the Rise of Rock’n Roll.”  And, you can enjoy that essay at XaviantHaze.Blogspot.com .
It is a COOL story and as is often the case with inquiring minds, Xaviant got on the death of Elvis Presley and the subsequent conspiracies claiming that Elvis was still alive and faked his death. This is a very sticky topic because it is ripe for ridicule, as being a modern urban legend – thanks to the countless fakers and people that have made themselves convincingly LOOK like Elvis, along with the general tendency these days to look at ANYTHING that’s outside the “standard story” of events and reach for the CONSPIRACY THEORY” label.
Xaviant has uncovered a surprisingly large number of details that just don’t add up that lend credibility to the notion the Elvis may well have faked his death to escape from being “Elvis Presley.”
Now, I know that sounds odd, but one of the best books that explains what Elvis’ life was REALLY like, is Larry Geller’s “If I Can Dream.” Geller was Elvis’ hair stylist, spiritual confidant and friend. Larry’s book is touching and at the same time unflattering. But what comes across is that the King of Rock’n Roll’s life was NOT what we all thought it was.
The conspiracies run from mild to wild and “Elvis Is Alive: The Complete Conspiracy” pulls together the loose ends and lets YOU decide for yourself.
IF Elvis was indeed alive, he would have turned 82 last January. IF he had turned around his life, stopped abusing prescription medications and lost weight, he COULD still be alive. He certainly wouldn’t LOOK the same, but he would most likely look similar. And of course, the ONLY way to know for sure would be a DNA test. It COULD happen. But first, Elvis has to show up!
Thanks for listening!
You can enjoy Xaviant Haze previous visits on Far Out Radio here… https://www.youtube.com/playlist?list=PLdLEP2ybFV13JKtfNhSVcCdR_DTOwUBge 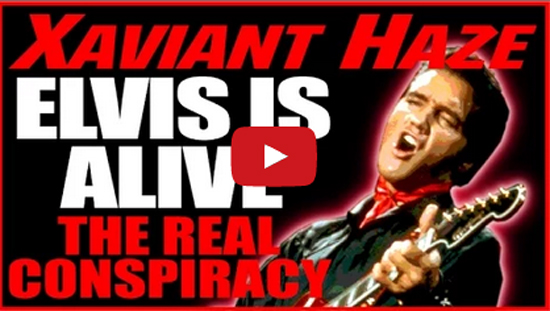