Who are the Anunnaki? Ancient Astronauts/Gods that visited Earth thousands of years ago?

We have a new guest for you this program. His name is Alex Teplish and he’s the author and illustrator of the Science Fiction Graphic Novel “In the Beginning, The Epic of the Anunnaki”. 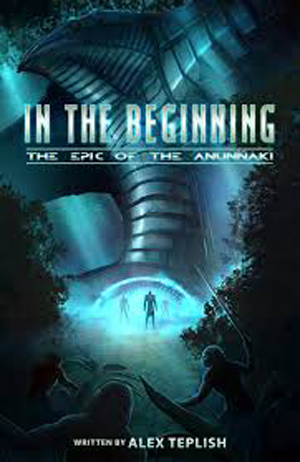 World War II was arguably the biggest, most important world-changing event of the 20th century. It was such a nightmare that after The Axis Powers surrendered on May 8, 1945 and then the surrender of Japan on September 2, 1945, the world breathed a sigh of relief. For war-torn Europe, Japan, and the South Pacific, it was time to rebuild. For America, it was time to go back to life.

The relief was so extreme that hardly anyone paid attention to what may well be the most important archeological discovery of the last two millennia – the discovery of the Dead Sea Scrolls in 1946. The scrolls are important because modern scholars were able to read the writings directly – not edited commentary “about” ancient scrolls. These were the cleanest accounts of ancient times. Once translated, the story was almost too much for most to believe.

Immanuel Velikovsky published, “Worlds In Collision” in 1950. Eric Von Daniken published “Chariots of the Gods” in 1968. Then in 1976 Zecharia Sitchen published “The 12th Planet.” One of the common threads in all three works  is the idea that extraterrestrial events and beings plays a very important roll in ancient human history.

The ancient beings were called, “the Anunnaki” which translates to, “Those who from the heavens came to earth.” It also means, “princely offspring.” The Anunnaki are mentioned in The Epic of Gilgamesh and the story of The Flood. They were also referred to as “the gods of the underworld.”

It is a complex story that were it not for the fact that the Dead Sea Scrolls are so unadulterated, they could be passed off as pulp fiction – the stuff of Hollywood sci-fi movies or comic books. Were the Dead Sea scrolls merely a draft manuscript for ancient comic books? I don’t think so.

The “graphic novel” is the modern day version of “illustrated manuscripts” of old. Rather than single pen & ink illustrations, modern graphic novels are lushly illustrated to bring alive the storyline of the book. Alex Teplish has been studying the Anunnaki for some time before he was motivated to write his graphic novel. Then with the help of illustrators and colorists, Alex published “In The Beginning” in January 2013. The book is available directly from his website, http://www.InTheBeginning.com. You can also check out images from the book, a blog with lots of fascinating posts, and you can order the book.

Alex is our guest this program for a fascinating conversation about his graphic novel, “In The Beginning: The Epic of the Anunnaki.”Listen in to discover the role of the mysterious Anunnaki as discovered in the translation of these ancient Dead Sea scrolls. Is this Science Fiction, or Science Faction? Remember,  truth is often stranger than fiction. Keep your mind OPEN.  – Scott

Find out more about this amazing book at http://InTheBeginningTheBook.com/.

The book is available on Amazon, HERE.
Enjoy a preview of the graphic novel on Youtube:
About Alex Teplish:

Alex Teplish was born in Odessa, Ukraine, formerly part of the USSR. His parents decided to immigrate to the United States, while Alex was still young. He went on to enjoy an average, American childhood and life growing up in Brooklyn, NY. Since an early age, he had an inquiring mind and took a great interest in Science and all things related; astronomy, extraterrestrial life, science-fiction, and comic books.

Alex also found interest in art/drawing, history, various religions & cultures, and other ancient stories. He is an accomplished graphic designer, artist , writer and researcher. Like his book page on facebook at https://www.facebook.com/InTheBeginningTheBook.