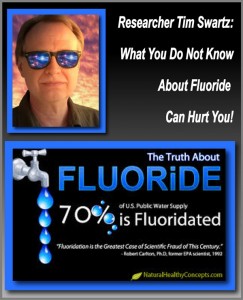 Tim Swartz is with us again this program on FarOutRadio with Scott Teeters. When did the United States start putting fluoride in the water and toothpaste and other products? Why did other countries follow? Is what they tell you in school about fluoride just a propaganda campaign to cover up the real (very dark) reasons for using fluoride where it does not belong? Listen in as we dig into the truth and open your minds.

What the experts say about Fluoride:

Scientific evidence over the past 50 plus years has shown that sodium fluoride shortens our life span, promotes various cancers and mental disturbances, and most importantly, makes humans stupid, docile, and subservient, all in one neat little package.

Fluoride was used by Nazis to sterilize inmates and make them docile. Fluoride a key dumbing-down ingredient of Prozac and Sarin nerve gas and many other medications.

Sodium fluoride is commonly used as a rat poison. Globalists and eugenicists have decided to add it to water supplies with the message to the public that it is good for teeth, despite warnings from the ADA stating that young children risk a disease called dental fluorosis.