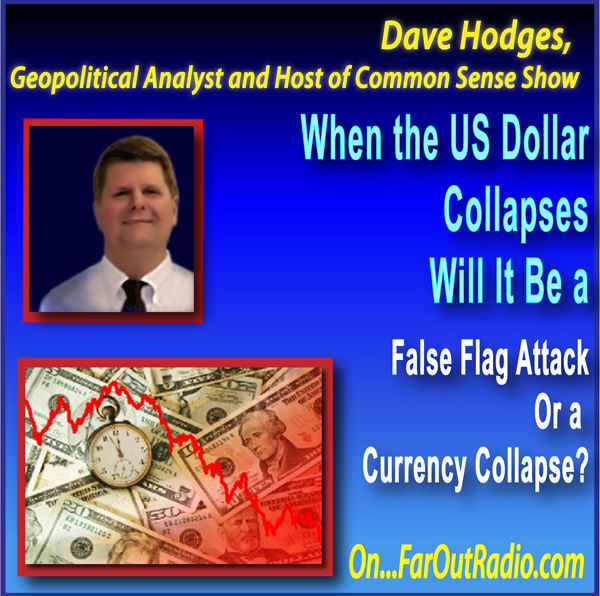 June 4th 2014 – 7pm-to-8pm EST, our guest is…
Geopolitical Commentator and Researcher
Dave Hodges
The Collapse of the US Dollar- What Does it Really Mean?

Our guest on Far Out Radio is talk show host and commentator, Dave Hodges. Dave’s radio program, “The Common Sense Show” is broadcast Live every Sunday at 9:00pm Central Time. All of Dave’s shows are available to listen to in the Archives page at TheCommonSenseShow.com. And his hard-hitting essays are also available at his website.

Dave Hodges has recently written an article warning American Citizens that a US dollar currency collpse is inevitable and that it will probably occur sooner rather than later. Will the collapse result in martial law? What can one individual do to be prepared and cope, even survive? Do not miss this thought-provoking interview!

What Will Happen When the US Dollar Collapses? – Dave Hodges

Dave Hodges. is an award winning psychology, statistics and research professor, a college basketball coach, a mental health counselor, a political activist and writer who has published dozens of editorials and articles in several publications such as Activist Post, News With Views and The Arizona Republic.

His Radio program on Republic Broadcasting, The Common Sense Show, features a wide variety of important topics that range from the loss of constitutional liberties, to the subsequent implementation of a police state under world governance, to exploring the limits of human potential. The primary purpose of The Common Sense Show is to provide Americans with the tools necessary to reclaim both our individual and national sovereignty.