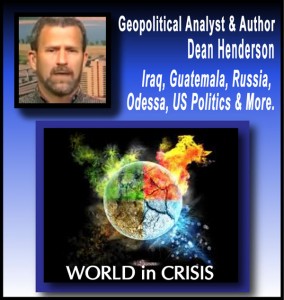 Dean Henderson on World Conflicts and How to Become a FREE AmericanUkraine, Iraq, Columbia, Israel, Gaza, Sudan, Russia, US Politics. His Book, Stickin' it to the Matrix & More.

Listen in as Geopolitical Analyst and Author Dean Henderson is interviewed by FarOutRadio Host Scott Teeters.

Dean and Scott covered some of the machinations and conflicts that are currently bubbling around the planet like a red hot caldron of hate. In the second half of the program Dean explained some of the concepts from his book, “Stick’in It To The Matrix” that can lead anyone to becoming a “free American.” And you DON’T have to sell your soul and time to a corporate overlord.


Do not miss this interview! Share with your friends!

Dean has recently published his fifth book.  The Federal Reserve Cartel is a brief well-documented history of the Eight Families who control the world’s private central banks and most of the planet’s resources.

The print version is HERE or HERE.

The Amazon Kindle version is HERE.

For all other e:book and PDF formats go HERE.

Dean Henderson is the author of five books: Big Oil & Their Bankers in the Persian Gulf: Four Horsemen, Eight Families & Their Global Intelligence, Narcotics & Terror Network, The Grateful Unrich: Revolution in 50 Countries, Das Kartell der Federal Reserve, Stickin’ it to the Matrix & The Federal Reserve Cartel.  You can subscribe free to his weekly Left Hook column @ hendersonlefthook.wordpress.com. Dean is a regular guest on FarOutRadio and is a featured columnist.

You can now listen to Dean Henderson's Interviews on our FarOutRadio YouTube Channel: