Now on YouTube. Our resident conspiracy scientist, Robert Morningstar is our guest this program.  Robert shares with us some of his recent findings that indicates that the U.S. government/military indeed has what we call, “UFOs.”

We will be discussing several videos that you can access from the below links.

Robert has many years of experience analyzing photographs and film.

Often times, these images are grainy and difficult to discern. So, it helps to have someone with experience explain what it is that we are looking at.

It’s always a “far out” time when Robert Morningstar stops by for a visit. Remember, the mind is like a parachute. It works best when it’s open. 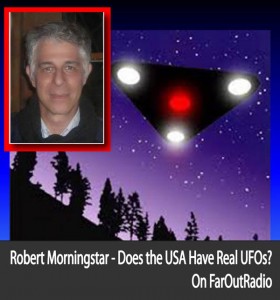