9.29.14 Now on YouTube.  Robert Schroeder is back with us this program.  His book, Solving The UFO Enigma: How Modern Physics is Revealing the Technology of UFOs gets five stars from Amazon. And those great reviews are from UFO and Physics buffs!

Bob Schroeder – “A Crisis In Physics”

Our resident Physics/UFO man, Bob Schroeder tells us about the latest report from Scientific American that indicates that Super Symmetry Theory is failing! It seems that there is no evidence of Super Symmetry Particles. While many in the physics world will no doubt lament this latest development, it has created the possibility of more attention to dimensional physics as a key to understanding how UFOs are able to do what the do and travel much faster than the speed of light. 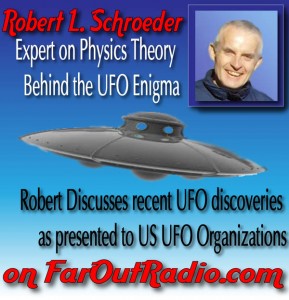 Bob Schroeder co-wrote the article “Any Takers” that elaborates on his position that modern physics is inadvertently unraveling the technology of UFOs!

You can catch all his previous visits by typing “Robert  Schroeder” into the Search box at the top of the right sidebar.

This program he discusses some of his most recent UFO findings as presented at a several UFO groups in the US recently where he was a featured speaker.

We review his long career in science and aerospace engineering, the likely physics that explains how UFOs obviously defy the “known” Laws of Physics. We also discuss the Large Hadron Collider and what can be learned from the experimentals being worked on now, and some of the more interesting and unusual documented UFO accounts from recent and distant past history. 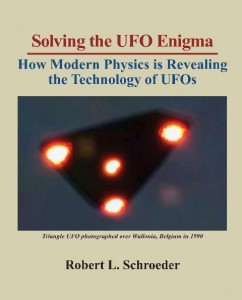 "I recommend this book to all readers who are; 1) Scientific adventurers, 2) Technical detectives and 3) Curious thinkers. This book is a classic on UFOs."

"As science grapples to understand concepts such as dark matter and hidden dimensions….Robert Schroeder takes the reader on a thrilling voyage of discovery where exotic physics might finally help us solve one of the greatest and most profound mysteries of our time."

His educational background includes a BA in mathematics, an MBA and an associate's degree in aerospace engineering.

He has closely followed developments in modern physics over the years and has researched the UFO phenomenon since the 1960's. He is a sought after speaker for prominent UFO organizations through the country.