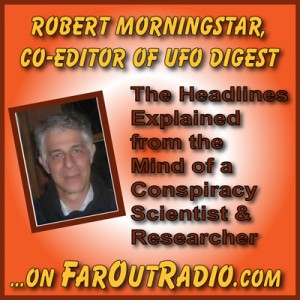 Far Out Radio Program. Want to know what's really going on? Listen HERE. FREE.  Robert D. Morningstar joins us for another very far out visit on Far Out Radio. Robert is the co-editor of UFODigest.com and is an investigative journalist.

There is so much going on today, the Obamacare and debt ceiling debacle, the NSA/Snowden scandal, the UFO cover up, the fifty year anniversary of the JFK assassination and so much more. This program we get back inside the mind of geopolitical analyst and conspiracy scientist, Robert Morningstar to shed some light as to what is really going on in the world and who we can believe and trust.

Robert B. Morningstar is a very grounded and committed investigator and writer and we never know where that amazing mind will take us. So strap in and enjoy the ride.

As the co-editor of UFODigest.com, Robert has his ear to the ground with all kinds of high strangeness. This program we again plumb the depths of Robert’s encyclopedic mind in a free form conversation. No matter where the conversation flows, you find yourself saying, “Hmmm…”

Robert D. Morningstar is a civilian intelligence analyst and tai chi teacher in New York City. He is a specialist in photo interpretation, analysis and computer imaging. He graduated from Power Memorial Academy (NYC). Morningstar (M*) was a New York State Regents Scholar (1967-72) and received a degree in psychology from Fordham University.