As submitted to and published on Peter Davenport's National UFO Reporting Center. 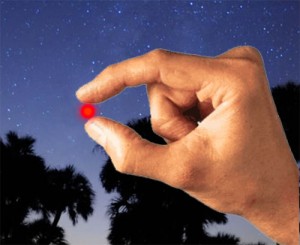 I was sitting on the porch, which faces East, with my Chihuahua Jake on my lap having our ritual late night one on one time, when I looked up and to the SE I observed a fire engine red illuminated ball of light about the size of a large green pea, held at arm’s length, at about 40 degrees off the horizon. It first appeared to be stationary, but when I averted my eyes for a second and looked back it was moving to its right, my left, in a NW direction, almost over my house.

My observation lasted approximately 1 minute. My gut feeling is it was 200 to 300 feet in altitude and an air speed slower than an Ultra Lite aircraft, although, I have no way to really know. There was no air traffic observed at the time.

There was no structure connected to the light and it was as bright and unchanged going as it was coming. It made no sound. The night was silent, in fact, it was one of those nights you have every once in a while where you suddenly realize the silence was almost deafening.

I didn’t notice the red illumination reflecting off anything in the yard or on the porch during the entire sighting. It seemed to be self-illuminated. There were no other lights connected to it or around it.

It continued NW until obscured by the top of trees.

I failed to report some previous sightings from years ago, but, thanks to my brother Scott’s encouragement, I’m reporting this one.