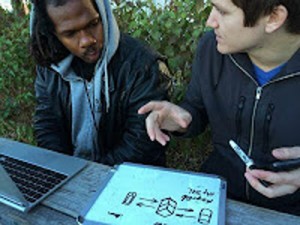 Leo, the homeless coder who was arrested early Monday morning for trespassing in a park near Chelsea Piers, has been released from jail, according to the man's teacher, Patrick McConlogue, who shared the news in a Facebook update:

Leo was released early this morning, in an incredible turn around time. He was taken to the hospital in the middle of the night for throwing up (sounds like stress) but the hearing after went quickly. Leo said, "The Police were doing their job, the officer who arrested me was just following orders and was very polite."

We've been following the story of Leo, the homeless man who is learning how to code, from 23-year-old programmer Patrick McConlogue, who offered Leo the opportunity after a much buzzed about Medium post McConlogue wrote in August called "Finding The Unjustly Homeless And Teaching Them To Code".

People have been following the story of an unlikely partnership with great interest. Programmer Patrick McConlogue had a wish to teach coding to homeless man Leo, (a.k.a. "The Journeyman Hacker"), to better his life. Leo of New York city accepted the offer.

Patrick, who received both cheers and jeers for the move, believes in the high demand for coders and that in 8 weeks he could teach Leo by meeting with him an hour before work and giving code lessons. McConlogue overnighted a cheap laptop, included software, books, and his own Wi-Fi hotspot. He is also providing free lessons for followers of the story on journeymancourse. The Journeyman Facebook page has a big, warm fan following.

After 45 days of lessons, Leo entered a hackathon with other software engineers and has an upcoming app creation. Leo was set to go on The Today Show on Wednesday. All of that changed this morning.

Police arrested Leo for trespassing today, before he could begin his lesson. They have confiscated his laptop. Presumably one of his few possessions.

People are frantically contacting the New York city police trying to explain the situation and they say they are doing all they can… Really? Leo can't just be released? The fact that Leo has been seen in that area for four months with no problems until now could mean they just don't care he is an Internet sensation about to appear on The Today Show – or it could be the huge nationwide crackdown on homeless. Or it could even be part of a bigger exploitation.

Regardless, two men have a right to gather for a lesson and a homeless man has a right to his laptop. If cops are "just doing their jobs" here, than that means they are enforcing bad codes to the detriment of people who haven't harmed anyone.

Patrick is, however, imploring people to be respectful to police and says the outpouring has been a great help. Police are aware of the Facebook page and if worse comes to worse, lessons will be done from the 10th precinct jail. Anyone contacting the department or mayor should probably emphasize the return of Leo's laptop.

PS: if anyone knows a member high up in the NYC police department or mayors office and would like to help please send me an email: vitadichrist@gmail.com

PSS: the worst part of this is even though I can show the reciept they are confiscating his laptop. I just don't understand.

A later status update talks about his plans to push for a hearing to get Leo out for The Today Show and says:

1. NYPD did nothing wrong. Remember these are the same men who– without question–laid down their lives in service during 9/11. They deserve the highest respect from us and are acting in response to an imperfect system, most times it works, in this case it did not.

2. Focus on Leo. He's is being taken down to Central Booking NYPD, I got to see him through the door and he saw me and forced a smile. Comment on this post and I will make sure it gets to him. This is about him.

3. Mobilize. We don't need the Mayor, we just need someone higher up to realize what has happened and help. Send a very simple message:

"Dear Mr Mayor, your New Year resolution was to learn to code. A young man named Leo has been learning as well and was recently arrested this morning. Respectfully, please have someone look into this story as soon as possible so that he can continue studying. Reach out to Patrick if you can help, 858.382.3043"
http://www.nyc.gov/html/static/pages/officeofthemayor/contact.shtml

4. Pray.
"Non-violence requires a double faith, faith in God and also faith in man." ~ Mohatma Ghandi Have faith in the NYPD, they are here to protect and serve. We support them and we support Leo to get through this.


Much faith indeed. Many people would disagree with the sentiments about falling on the mercy of the police. Nevertheless, that is Patrick's action plan.

FarOutRadio Editor's Comment: Note the Update from Business Insider at top to see that activist efforts did work!!

Heather Callaghan is a natural health blogger, food freedom activist and regular guest here on FarOutRadio.com. You can see her work at NaturalBlaze.com. Like at Facebook.