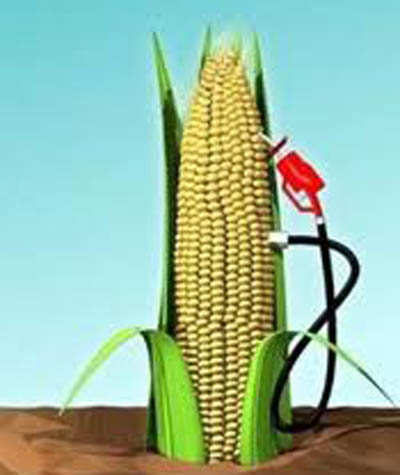 For First Time, E.P.A. Proposes Reducing Ethanol Requirement for Gas Mix —by MATTHEW L. WALD as republished from The New York Times. FarOutRadio Article. WASHINGTON — The Environmental Protection Agency on Friday proposed reducing the amount of ethanol that is required to be mixed with the gasoline supply, the first time it has taken steps to slow down the drive to replace fossil fuels with renewable forms of energy.
Most fuel pumps and vehicles are not equipped to handle more than 10 percent ethanol, the E.P.A. said, and there has been little demand for more.
The move was expected, but it drew bitter complaints from advocates of ethanol, including some environmentalists, who see the corn-based fuel blend as a weapon to fight climate change. It was also unwelcome news to farmers, who noted that the decision came at a time when a record corn crop is expected, and the price of a bushel has fallen almost to the cost of production.
“We’re all just sort of scratching our heads here today and wondering why this administration is telling us to burn less of a clean-burning American fuel,” said Bob Dinneen, president of the Renewable Fuels Association.
Farmers, ethanol producers and high-tech companies trying to make renewable fuels from wastes have all invested heavily in the ethanol industry, with an expectation of a heavy demand, advocates said.
But the E.P.A. said that a big part of the problem was that automobile fuel systems and service stations were not set up to absorb more than about 10 percent ethanol. Most cars on the road, according to the automakers, and most fuel pumps, according to service station groups, are limited to the current mixture, called E10, and there has been little demand by consumers for more.
Charles Drevna, president of the American Fuel and Petrochemical Manufacturers, said that the ethanol interests were relying on “a continual government program that is an anachronism in 2013, that is seriously flawed, that puts consumers at risk, that consumers don’t want.”
The timeline for phasing in enormous volumes of renewable fuel is laid out in the Energy Independence and Security Act of 2007, but the schedule has turned out to be impractical, forcing year-by-year adjustments. In the years since the law was passed, imports of oil have declined sharply and domestic production has risen.
Meanwhile, American oil production has increased in ways not expected in 2007, because of a new drilling technique, horizontal drilling in shale combined with fracking, the same technique that has flooded the market with natural gas.
Last month, domestic oil production exceeded oil imports for the first time in years. That has led the oil refiners to argue that requiring ethanol use to displace oil imports is no longer so important, and that the whole system of mandates should be dropped.
At the same time, there has also been a decline in the overall demand for motor fuel, and it is poised to go yet lower. Demand had been growing, year by year, and Congress expected it to continue to do so. The 2007 law set ethanol quotas that would have meant a modest percentage increase in the amount of ethanol used in the mix.
Instead, ethanol became an unexpectedly large percentage of total fuel supply, and began to push up against the barrier of 10 percent, the maximum ethanol fraction allowable in most gasoline.
Millions of cars can handle blends of up to 85 percent ethanol, “flex fuel” vehicles, but few consumers like that fuel so few filling stations sell it.
Those that do are struggling. For example, on Nov. 6, a Sunoco station at a suburban mall in Potomac, Md., about 15 miles northwest of the E.P.A. headquarters, opened an E85 pump, with a formal ribbon-cutting and speeches by Maryland officials. But the manager, Amit Sharma, said Friday that the pump was selling only 60 to 70 gallons a day. “It’s nothing,” he said. One problem, according to Mr. Sharma and others, is that many people drive the flex fuel vehicles, but do not understand that means they can accept up to 85 percent ethanol.
In another strategy to dispose of rising volumes of ethanol, the producers have pushed the E.P.A. into allowing a blend that is 15 percent ethanol rather than 10, but few gas stations are equipped to sell that, and since it is approved only for newer cars, few stations have spent the money to refit their pumps to handle it. In addition, trade associations for companies that make power garden equipment and boat engines complain that that fuel will cause breakdowns.
The E.P.A. will now take public comment, which is certain to be voluminous, as the issue is crucial not only to corn farmers, who produce most of the feedstock for ethanol, and for oil companies, whose product can be displaced by the fuel, but also to all other corn customers, including livestock producers, grocers and restaurant chains.
Ethanol, the most prominent of the renewable fuels, divides environmentalists. It may involve modestly lower carbon production, but the increased market for it may also have increased farmers’ use of fragile, marginal land. Its effect on fuel prices at the pump is disputed.