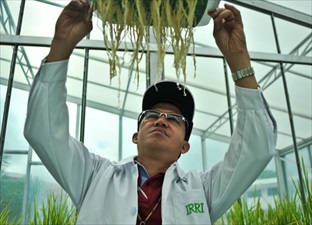 Genetic modification is touted as the only way to feed starving nations, yet they often have decreased yields or lead to superweed and insect resistance.But there are solutions other than changing the entire ecology. Biodiversity, crop rotation techniques, or…simple crossbreeding!Earlier in August, a study published in Nature Genetics showed promising results by Japanese researchers headed by Yusaku Uga, researcher with the National Institute of Agrobiological Sciences in Japan.Rice is heavily studied now – it is a large part of nearly half of the world's daily diet. However, it doesn't do well at all in drought conditions, mainly because of its shallow root system.

A Deeper Rooting 1 (DRO1) gene found in 60 rice varieties – and when its roots were pointed down instead of sideways – created roots twice as deep as usual. This could allow it to adapt to drought by reaching more water and nutrients in the soil. The results of what they did with those findings were amazing.

They found that in moderate droughts, the DRO1 rice yield was double of typical shallow-rooted rice. But in severe drought it became even greater with 3.6 times more yield.

The most important point is that we had rice grains produced under drought conditions.

When rice crops just tolerate drought, they cannot get water and nutrients, resulting in a kind of survival mode.

They crossbred one type of rice that contained DRO1 with a more typical shallow root variety and then bred those offspring to make a crop where the DRO1 gene was forefront.

Crossbreeding, which has gone on for centuries, is not anywhere near the same thing as genetic modification, as companies like Monsanto want people to believe.

International Rice Research Institute (IRRI) thinks that 8-10 million extra tons of rice are needed annually to keep prices at an affordable $300 per ton. Drought affects India greatly among other countries.

However, it should be noted, that IRRI is backed by Gates and Rockefeller Foundations and they are forcefully pushing GM field trials with Golden Rice, especially in the Philippines, with the "best of intentions." Even though the poor, the hungry, and the farmers it was designed for responded by trampling and uprooting the trial.

Another type of GM rice trial is going on in China. And during that trial, researchers discovered that the GM glyphosate-resistant breed designed to thwart invasive weedy rice counterparts, actually bestows its transgenic material on them through cross-pollination, making them an even stronger threat.

Without changing the ecology, simple crossbreeding techniques can often innovate adaptable varieties to create stronger yields during drought; thereby feeding more, bolstering the economy, and negating millions in research for GM breeds that could be hazardous to human, animal, and environmental health or create more farming troubles.


Heather Callaghan is a regular guest here at FarOutRadio.com  She is a natural health blogger and food freedom activist. You can enjoy her investigative work at NaturalBlaze.com. Like at Facebook.