Now on YouTube.  Bob Frissell, author of “Nothing In This Book Is True, But It’s Exactly How Things Are” returns for another sparkling visit. Bob has been with us many times.

Topic: Bob and I covered a lot of material this evening, but in truth, it was like a Whitman’s Sampler Box of Chocolates that gives “just a taste.” The focus of our conversation was an ancient being named Thoth and the contemporary man named Drunvalo Melchizedek.

Thoth’s story goes back 52,000 or so years ago and is connected to the land of Atlantis, ancient Egypt, and the non-physical consciousness grid that surrounds the planet. It is this energy grid that is responsible for “special places” around the world, including, Sedona, Arizona, Stone Hedge, Mt. Shasta, and Machu Picchu. As always, this was another sparkling, FAR OUT conversation with Bob Frissell.

This program Bob shares with us the story of Thoth (known as the scribe in ancient Egypt) the individual  that introduced “writing” to humanity as a way of remembering our history. Thoth is considered by many as the ultimate and arguably the original world historian.

“Writing” is so common that we take it for granted, when it was actually a total game changer. Bob shares his understanding of how Thoth did it and how it is connected to the 83,000 sacred sites around the planet that form the energy grid called The Akashic Records – the Living Memory of the Earth.

As far-out as all this sounds it is relevant today, as we see playing out before our eyes, the assertion of the Dark Forces that are working with all of their might to keep humanity asleep with their doublespeak and lies through what we now call “the mainstream media.”

The mainstream media is humanity’s external central nervous system that tells how we are doing, and what we are doing. And right now, it is trying to hypnotize us that genocide is good, war is good, many have to die so that the chosen few can live and thrive.

This is a LINGUISTIC TRANCE that is being spun by the forces of darkness. As uncomfortable as it will be, it is time to take THE RED PILL.

Bob Frissell's writing on Thoth: "Thoth is a specific historical man who went through ascension 52,000 years ago. For 16,000 years he was the king of Atlantis, where his name was Chiquetet Arlich Vomalites. Throughout Egypt, he was known as Thoth…..Thoth's most famous act was introducing writing to the planet. He was called "the scribe" in Egypt, for he is the one who wrote all the ancient history down. "  Do not miss this interview.

Most likely, Bob Frissell’s books have only scratched the surface. But if you too have the itch to know who we really are, what Life is all about, and the true meaning of UFO and Alien visits, our interviews with Bob Frissell are the perfect way to start and will give you PLENTY to go, “Hmmm…” about.

Thinking Caps required! This is FAR OUT! –Scott

Recently Bob Frissell updated his book, "Nothing In This Book Is True…" for the book's 15th anniversary in paperback and Kindle, available HERE. 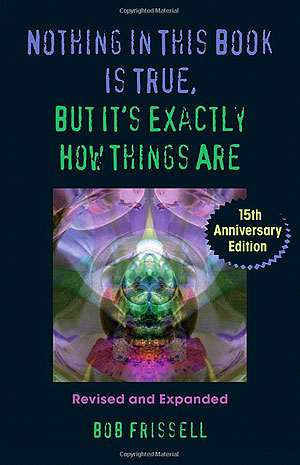 BOB FRISSELL, regular guest on FarOutRadio, is a master rebirther and teacher of thirty years, whose books are regarded as underground spiritual classics. In addition to Nothing in This Book Is True But It’s Exactly How Things Are, he is the author of Something in This Book Is True and You Are a Spiritual Being Having a Human Experience. His books are published in seventeen languages and are available in more than thirty countries.

Bob has been a featured speaker at The Global Congress of Spiritual Scientists in Bengalore India, the 4th Annual Symbiosis Gathering at Yosemite, The Prophets Conference in Tulum, and many New Living Expos. He has also appeared on numerous talk shows, including The Jeff Rense Program and Coast to Coast AM. He has presented his workshops throughout North America and Europe.

He was trained by Leonard Orr, the rebirthing pioneer, and by Drunvalo Melchizedek, the originator of the Mer-Ka-Ba and Unity Breath meditations. He gives private rebirthing sessions along with his two workshops: “The Breath of Life (Rebirthing and Emotional Healing)” and “The Flower of Life (Sacred Geometry and the Mer-Ka-Ba).” He lives in Sonoma, California, and can be contacted via his website, www.BobFrissell.com.

The Shift of Ages for Spiritual Consciousness – Bob Frissell