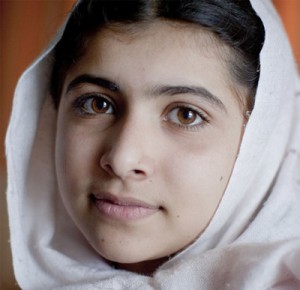 as  republished from Mirror News in the UK. The rights for women's education acivist, just a teenager, said she had told herself that if attacked by the Taliban, she would talk to her intended killer about the importance of education.

This is the moment Malala Yousafzai – who was shot by the Taliban for championing girls' education – left US chat show host Jon Stewart speechless.

The 16-year-old rose to global fame after being shot in the head and neck while on her way to school with other girls in Pakistan – before recovering in Britain.

The teenager left Stewart visibly stunned when she said that if attacked by the Taliban she would talk to her intended killer about the importance of education – rather than trying to defend herself physically.

She concluded by saying: "That's what I want to tell you, now do what you want."

"We thought the Taliban were not that much cruel that they would kill a child."

Malala, who was presented with a Mirror Pride of Britain Award this week, also raised a laugh herself by saying that if attacked she would hit the Taliban assassin with her shoe.

"But then", she said  "I said [that] if you hit a Talib with a shoe then there will be no difference between you and the Talib.

"You must not treat others with that much cruelty and that much harshly."

The Taliban have openly vowed to kill Malala, after they failed in their first assassination attempt.

This sparked a standing ovation from the audience, while Stewart so impressed he jokingly offered to adopt Malala.

Earlier in the show, Stewart asked her whether she knew she was a Taliban target.