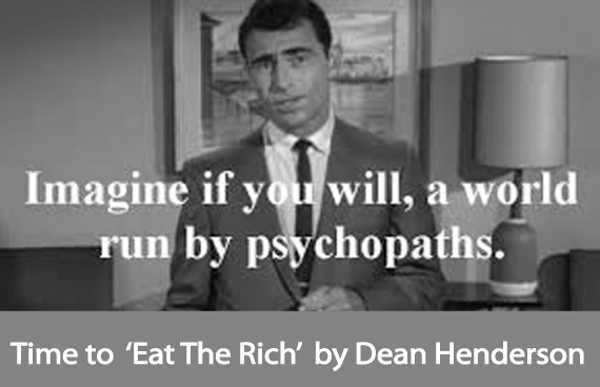 For decades the American middle class bought into a plethora of Ayn Rand-inspired notions regarding their economic strategy. Keep your head down, plow money into your 401K and get to work on time. …

by Dean Henderson
For decades the American middle class bought into a plethora of Ayn Rand-inspired notions regarding their economic strategy. Keep your head down, plow money into your 401K and get to work on time. If you did these things, you could count on Wall Street money shufflers and their corporate “job creator” tentacles to lift your little life raft with their graft-ridden blood-soaked tide.

It was a formula predicated on endless resource wars in faraway lands, a necessary scorn for the poor, an infatuation with the wealthy and the shutting down of one’s humanity.

END_OF_DOCUMENT_TOKEN_TO_BE_REPLACED 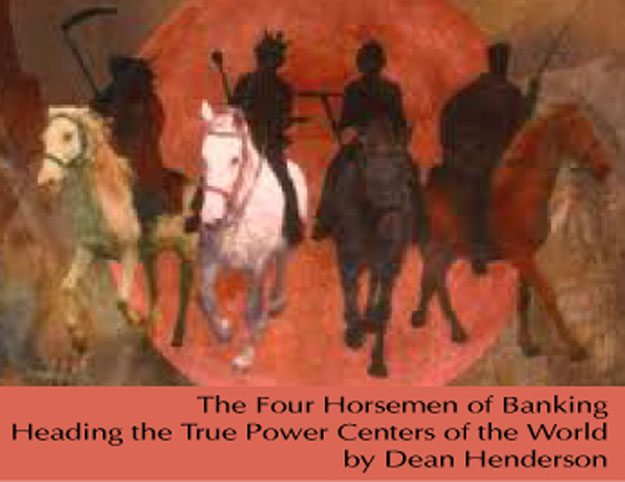 If you want to know where the true power center of the world lies, follow the money – cui bono. According to Relbanks the world’s seven largest banks in terms of market capitalization in 2014 rank …

If you want to know where the true power center of the world lies, follow the money – cui bono.According to Relbanks the world’s seven largest banks in terms of market capitalization in 2014 rank as follows: (1 Wells Fargo, (2 JP Morgan Chase, (3 ICBC, (4 HSBC, (5 Bank of America, (6) China Construction Bank & (7) Citigroup.

END_OF_DOCUMENT_TOKEN_TO_BE_REPLACED 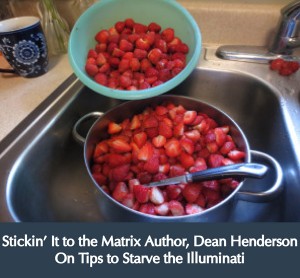 by Dean Henderson, Featured FarOutRadio Columnist – (Excerpted from Chapter 6: Mercenary Shopping: Stickin’ it to the Matrix)

Shopping for frivolous and unnecessary items consumes way too much of most people’s time and budget, while chaining the new owner of this junk to a cluttered garage, a storage unit and general sedentary misery.

Still there are certain tools and entertainments we wish to procure and there are many good ways to get them other than at a store.

Again it is all about attitude. You must develop a resistance to shopping. It should be viewed as morally reprehensible. When you need to attain an item, do your research and find out where to get it at the best price, preferably – except, I would argue, in the case of electronics – used. Remember, the system has declared war on your family. Don’t shop much. And fight like a mercenary of the revolutionary army when you must shop.

END_OF_DOCUMENT_TOKEN_TO_BE_REPLACED 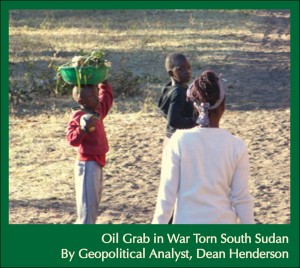 y Dean Henderson, Featured FarOutRadio Columnist
BBC reported yesterday that over 1,000 people protested in the South Sudanese capital Juba after a UN convoy marked as carrying food was caught ferrying weapons to rebels loyal to former government deputy Riek Machar.  The rebels, who began attacking the government in December, are known as The White Army.  More precisely they are the Rothschilds’ army.

On July 9, 2011 South Sudan became the world’s 193rd nation. Less than a week later violence has erupted in South Kordofan – an area on the new border between Sudan and South Sudan which is controlled by Sudan and rich in oil.

Not content with the seizure of South Sudan’s oilfields via independence, the Rothschild-led Eight Families banking cartel now seeks to push the new border further north, creating more bloodshed while grabbing yet more crude oil from the Sudanese people.

END_OF_DOCUMENT_TOKEN_TO_BE_REPLACED 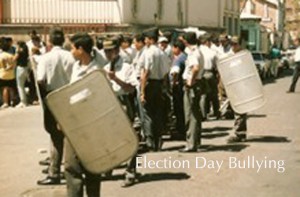 This past weekend, while the Ukrainian military was using helicopter gun ships to bomb trucks carrying wounded civilians to hospitals in Donetsk, billionaire oligarch Petro Poroshenko won the sham presidential elections in Ukraine.

According to Denis Pushilin, chairman of the Donetsk People’s Republic Supreme Council, over 100 people were killed in attacks which coincided with the putsch-installed Kiev regime’s national elections. The result of these “elections” was predictable.

The military assaults on left-leaning eastern Ukraine ensured low turnout in that region, where most people didn’t recognize the elections as legitimate in the first place.

Poroshenko was touted as “moderate chocolate king” by Western media, but soon announced he will continue the crackdown on the Eastern opposition. Little mentioned is the fact that he is the former head of the Council of Ukraine’s National Bank – the country’s privately-held central bank.