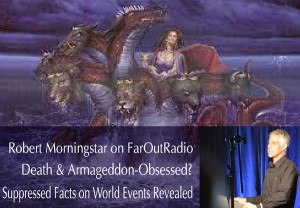 Now on YouTube. Our regular FarOutRadio guest, Robert Morningstar returns this program.  Why are we obsessed with death, Prophecy, and Armageddon?

How hard would it be to engineer events to get people to believe that “Prophecy” is being fulfilled? If Life is simply a pathway to the fulfillment of a prophesized event, does this not make a mockery of Free Will? Are we all just, NUTS? Or do some need to be schooled that there are no “Special People” or “Chosen Ones” or that “Only True Believers Will Go to Heaven”?

END_OF_DOCUMENT_TOKEN_TO_BE_REPLACED

In tandem with his recent 3/31/2014 FarOutRadio Interview, Robert D.Morningstar shares a set of images and text related to his presentation.

END_OF_DOCUMENT_TOKEN_TO_BE_REPLACED

" In our obsession with antagonisms of the moment, we often forget how much unites all the members of humanity. Perhaps we need some outside, universal threat to make us recognize this common bond.
I occasionally think 'how quickly our differences worldwide would vanish if we were facing an alien threat from outside this world.' And yet, I ask is not an alien force ALREADY among us?” "

The 9 Victims of a UFO Mass Murder

This article is based on the video book documentary made by D. Romahlko in tribute to

END_OF_DOCUMENT_TOKEN_TO_BE_REPLACED

TMA-1: The Martian Artifact. A Sign of Intelligent Life on Mars. A Martian Sculpture Depicts "The Eye of Mars"

"For all the World to See…"

"The first requirement of a scientist is that he be curious.
He should be capable of being astonished and eager to find out."

I am writing today to relate to you details of a remarkable discovery made on the planet Mars by the Mars Opportunity Rover in March 2004.

END_OF_DOCUMENT_TOKEN_TO_BE_REPLACED

Beyond the Boundary of Earth From Science Fiction to Reality

The Earth civilization has arrived at seemingly unsolvable global problems of many different kinds.  The lack of timely solutions to the accumulated problems has led to stagnation in world economics.  This has provoked new forms of rivalry between world powers with the intention of global capitalization of monetary and natural resources.