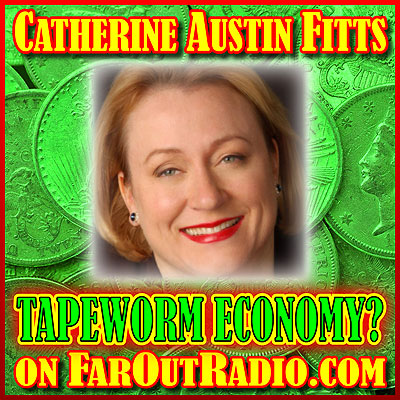 Financial advisor, and publisher of Solari Report, Catherine Austin Fitts is our guest for this evening. There’s an ancient saying that goes, “Perspective adds wisdom to any given situation.” Catherine Austin Fitts brings a unique perspective to any conversation about economics. After she served the upper echelons of government, she discovered what she described as a “criminal enterprise.” Catherine shares her story as well as her thoughts on what she calls, “the tapeworm economy” and what we can do about it.

Catherine has a BA from the University of Pennsylvania, an MBA from Warton School, and has studied Mandarin at the Chinese University of Hong Kong. Catherine was highly successful on Wall Street and served as the managing director and member of the board of directors at the Wall Street investment bank Dillon, Read & Co. Inc, and was the president of Hamilton Securities Group, an investment bank and financial software developer.

Her Wall Street expertise attracted the attention of former president, George H. W. Bush, as she was given the opportunity to work as the Assistant Secretary of Housing and Federal Housing Commission in the United States Department of Housing and Urban Development.

But sometimes the view from the top isn’t what one expects. As Catherine has explained on other programs, after she was in the upper echelons of government, she discovered what she described as a “criminal enterprise.” Catherine shared her experiences in “Dillon Read and the Aristocracy of Stock Profits.” Here’s a quote:

“"Long ago, I made a promise that I would never act against the best interests or the excellence of my own people—that I would do my best to ensure that we were worthy of the stewardship of our world and that we did our best to leave a better world for generations yet to come.

To make and keep such a promise is to understand that money and position are tools, not goals, and that death is not the worst thing that can happen. Some would probably accuse me of 'fighting the tape' and not being 'good at the game.' I would tell those people that now is not the time in the history of our people for a failure of imagination.”

It’s been an astonishing ride since the heady days of Wall Street and Washington DC and Catherine shares her story as well as her thoughts on what she calls, “the tapeworm economy” and what we can do about it.

You can read and enjoy Catherine’s articles at her website, Solari.com/blog. In 2010 Catherine authored the book, “Gifting To The Children We Love” and her DVD “Investment Strategies for Changing Times” are both available at Amazon.com.