Breaking News: David McGowan's New Book, Weird Scenes Inside the Canyon: Laurel Canyon, Covert Ops & the Dark Heart of the Hippie Dream is now published!! You may also  enjoy sneak peeks at the photos and a bit of trivia on his new facebook page!

This from Dave's Site: 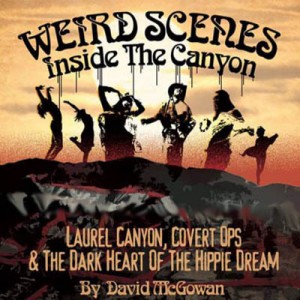 "No, this isn't actually a new installment of the Laurel Canyon series. It is, instead, an explanation of why there haven't been any new chapters posted in quite some time now. There are, I can assure you, a number of new chapters that have been written – one on Frank Zappa and a couple of his more colorful discoveries (Captain Beefheart and Larry "Wild Man" Fischer), one on Arthur Lee and his band Love, one on John Kay and his band Steppenwolf, and one on Brian Wilson and the Beach Boys. There are also a number of new additions to the Laurel Canyon Death List. And some supplemental material concerning the death of young Godo Paulekas.

There is also a new chapter that takes a look at the punk and new wave scene that, in the late 1970s, began replacing the sounds of Laurel Canyon on the radio dial. And a new epilogue that reveals that Charlie Manson wasn't the only serial killer/mass murderer with curious ties to the Laurel Canyon scene. And a new preface that aims to accomplish two things: explain to readers how and why I came to pen this saga, and preemptively respond to potential critics. Also added is a forward written by my esteemed colleague, Nick Bryant, author of The Franklin Scandal.

None of that, however, will be making an appearance on this website, or on any other website. Instead, it will be incorporated into – drum roll, please – a Laurel Canyon book! I have been, you see, quietly working for some time now with a publisher in the UK. And what we have put together, I honestly believe, is a vastly improved telling of the Laurel Canyon story. In addition to all the new material that will be exclusive to the book, much of the previously posted material has been reorganized and extensively edited to improve the flow of this rather dark journey through what was supposed to be a hippie utopia. And both an index and a bibliography have been added to make this work a more valuable research tool.

The published version will carry a different title: Weird Scenes Inside the Canyon: Laurel Canyon, Covert Ops & the Dark Heart of the Hippie Dream. That's about all I have to report for now. As more information becomes available, such as a release date and a cover price, I will keep this page updated. Though I haven't yet discussed it with my publisher, it is possible that I may make a bulk purchase so that I can sell signed copies through this website. That though will depend on whether there appears to be a sufficient demand, so if you would be interested in obtaining a signed copy, drop me an email.

Update 1 (September 16, 2013): In the Table of Contents below, all chapters/sections that appear in red consist of all new, previously unposted material; those in orange have been supplemented with varying amounts of new material.
Update 2 (September 23, 2013): Weird Scenes now has its very own Facebook page at www.facebook.com/WeirdScenesInsideTheCanyon, with additional information. If you stop by, please be sure to hit the 'like' button."