A look into David Watts' primer books for understanding our times. 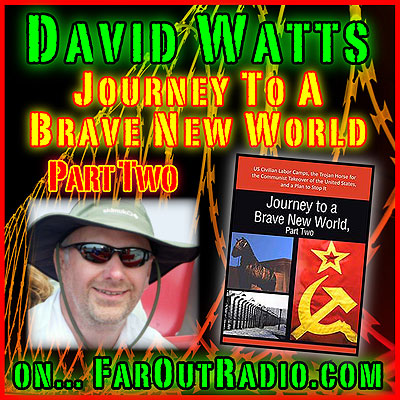 Researcher and author David Watts is back for his second visit on Far Out Radio. David was with us on June 12, 2013 to talk with us about his first book, “Journey To A Brave new World,” a primmer for understanding the social, geopolitical landscape of our times.

This program David  talks with me about his follow up book, “Journey To A Brave New World, Part Two.” Like many independent thinkers, David’s world began to radically change on the morning of September 11, 2001. In retrospect, it’s not much of a stretch to say that it was the first installment of World War III.

That probably sounds like an over the top statement, especially if you have been trained by The History Channel as to what a “world war” looks like. So, if that’s what you are looking for, you’ll miss what before your very eyes.

Now, one could make the argument that the new low-grade version of a world war is better that an all-out WW II-style massive military war. But this ONLY makes sense if you happen to not be in the way of a “special operation.”

“Seeing it” is not easy because things are playing out very slowly and differently. To “get it” you have to have an open mind, a willingness to look into uncomfortable things, spend time reading and researching, and then discern what you have taken in. Anyone can do this, it just takes time and the willingness. One doesn’t need to be an “expert” or an “insider.”

The first book is only 122-pages long, including the bibliography and the second book is only 92 pages long. Both books could be read in an afternoon. What the reader chooses to do with the information is up to them, but they will not be the same. For as Ralph Waldo Emerson once said, "The mind, once stretched by a new idea, never returns to its original dimensions."

You can enjoy David’s first visit on Far Out Radio from June 12, 2013 by going HERE.

David Watts will make a return visit to continue our conversation in the first hour of our July 9, 2013 program.

Be sure to visit David Watts website at http://www.JourneyToABraveNewWorld.com .

Far Out Radio with Scott and Karen Teeters is broadcast Live from 6pm to 8pm Eastern Time and 3pm to 5pm Pacific Time.
We invite you to search the topics of shows box to the right to listen to and download our archived shows as mp3s anytime you like!!