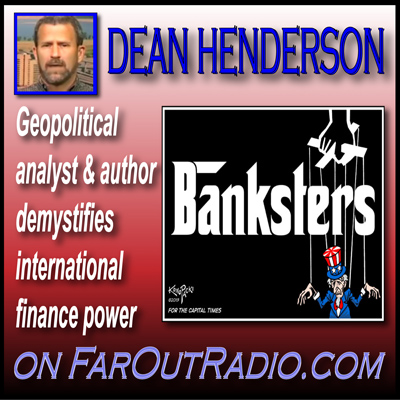 FarOutRadio Program. Listen HERE. Independent researcher and political analyst Dean Henderson joins us this program for an in depth look at the ongoing Financial Crisis – motivation, world power, banksters, terrorism and more, a close look at recent geopolitical events. His geopolitical books include “Big Oil & Their Bankers In The Persian Gulf,” and “The Grateful Unrich.”  And Dean is the author of the autobiographical book, “Stickin It To The Matrix”.

This program, Dean and I talk about the history and people behind current events going on with the financial fiasco that is not ending. What's real and what's not and what can you do about it for yourself?

Dean Henderson is a well respected international investigative journalist. His Left Hook columns have appeared on Infowars, Globalresearch.ca, David Icke, Jeff Rense and other websites. His print articles have appeared in Multinational Monitor, In These Times, Paranoia and several other journals.

A self-described revolutionary and traveler to 50 countries, Dean has authored four books. His first book, Big Oil and Their Bankers in the Persian Gulf: Four Horsemen, Eight Families and Their Global Intelligence, Narcotics and Terror Network (www.createspace.com/3476183), has become a global cult classic among conspiracy researchers.

His second book, The Grateful Unrich: Revolution in 50 Countries, chronicles insights gained from a lifetime of overseas travel.

His latest book, Stickin' it to the Matrix, is a practical guide to dropping out of the evil Illuminati system and kicking it in the nuts!

He and his wife Jill recently took an 11-month journey through South Africa, Swaziland, Lesotho, Botswana, Zimbabwe, Nepal, Thailand, Malaysia and Laos. They currently reside on an increasingly self-sufficient homestead in the southern Missouri Ozarks.

Dean's ongoing investigative journey into the history and machinations of today's new world order motives and players is not to be missed.

Dean Henderson’s articles can be read at… http://DeanHenderson.wordpress.com