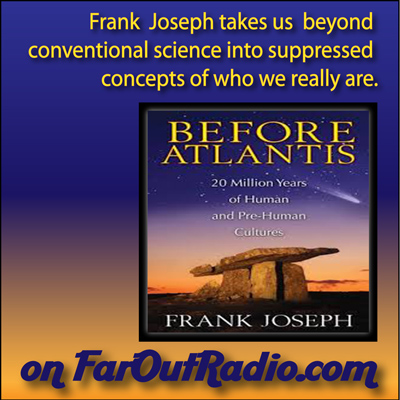 FarOutRadio Program. Listen HOUR ONE HERE.  HOUR TWO HERE. This program, Frank Joseph and I get into his motivation for digging into the depths of suppressed scientific research for the truth of who we are and where we really came from as a species.

Tying in his extensive research into Atlantis and Lemuria, Frank Joseph in his book, Before Atlantis: 20 Million Years of Human and Pre-Human Cultures, provides a 20-million-year timeline of the rise and fall of ancient civilizations, both human and pre-human, the evolutionary stages of humanity, and the catastrophes and resulting climate changes that triggered them all–events that our relatively young civilization may soon experience.

Frank Joseph was the editor-in-chief of "Ancient American" magazine since its debut in 1993 and now works as a correspondent. He is the author of twenty books about prehistory re-published in as many foreign languages, including "The Atlantis Encyclopedia", "Opening the Ark of the Covenant", and "Unearthing Ancient America". Joseph is a frequent guest speaker at various metaphysical and archaeological societies in the U.S. and abroad.