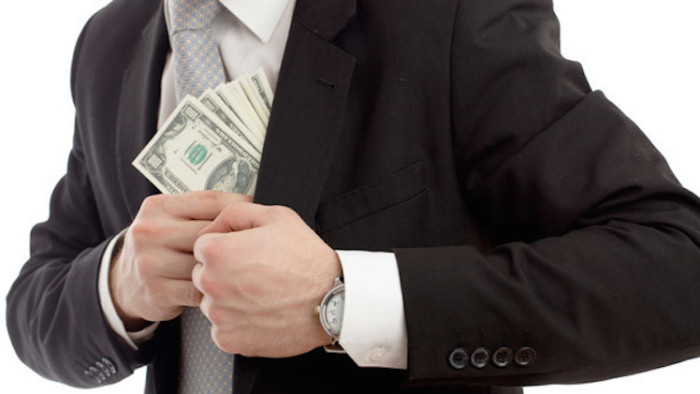 by Vani of FoodBabe – republished

Every day more people are becoming aware of the chemical pesticides, synthetic food additives, antibiotics, and growth promoting drugs that are used to make conventional food products, and are choosing cleaner organic food thanks to you! People like us are rising up against the companies that are creating these toxic chemicals and boycotting major brands that have been mainstays in American supermarkets for decades. You can find organics just about everywhere now – Walmart, Target, airports, Chipotle, Panera and you can even get organic tea at Wendy’s. It’s obvious that the conventional food sector is not happy about this growth in organic foods and subsequent decline in their profits. They are so unhappy that they’ll spin whatever they can in the media to hold on to their share of the food economy.

That’s why this brand new report that just came out last month is so important to read: Spinning Food: How Food Industry Front Groups and Covert Communications Are Shaping The Story Of Food by Kari Hamerschlag, Anna Lappé, and Stacy Malkan.

This report exposes the dirty tactics that Big Food and agrochemical companies have implemented to combat the organic food movement. They are spending hundreds of millions of dollars on stealth public relations (PR) campaigns, using deceptive front groups to push coordinated messages that attack organic food, and activists like me, while defending the continued use of synthetic pesticides, antibiotics, GMOs, and chemical food additives. We are being bombarded with their messages that are making their way to the pages of the largest media outlets and onto the evening news.

As exposed in their report, four of the largest food and chemical trade associations are spending insane amounts of money – over half a billion dollars from 2009 to 2013! They also uncovered that 14 of the largest front groups working for the industry spent about $126 million during that same time period, often without fully disclosing where their funding comes from. This amount of spending is unprecedented! 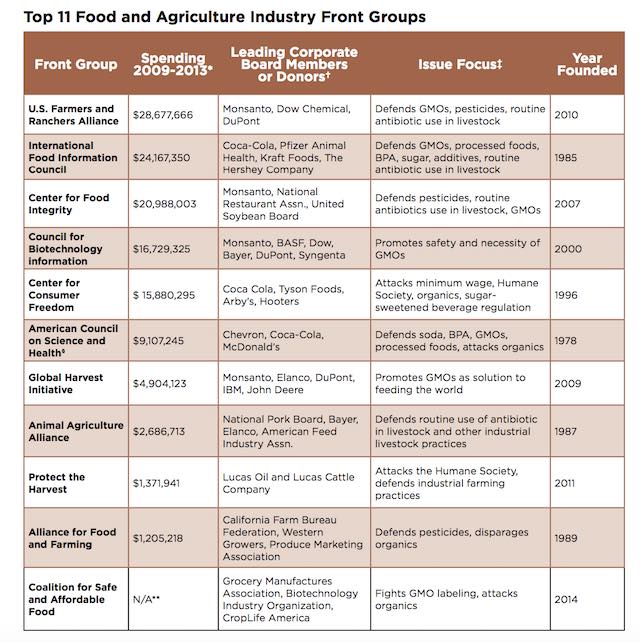 graphic on page 9 of report

This just goes to show how much they want to ensure that they can continue profiting off of chemical-intensive industrial agriculture and cheap food additives – and to do this, they are doing everything they can to sway public opinion.

What do you think when you hear quotes in the media like these?

“Organic is no better than conventional and not worth the money.”

“U.S. meat production is safe, efficient and does not overuse antibiotics.”

“We need GMOs to feed the world.”

Corporate interests are at play!

Who is really telling the story here? Is it a non-profit organization that is working for the public good or for corporate interests? The Big Food and agrochemical companies are relying heavily on front groups to promote these types of messages in the media, and they even go as far as training seemingly independent farmers, bloggers, and scientists to act as expert sources for journalists. Front groups appear to be independent, but are actually run by experienced PR firms or industry trade groups that have their profits hanging in the balance. You’ll often see these front groups and their trained messengers quoted in the media without any mention of their connections to the industries they work for, and without any conflict of interest disclaimers. It’s all a sham!

The Spinning Food report exposes all of the big front groups that are seen quoted in the media, so we can become more aware of their tactics, and more vigilant about looking out for propaganda.

For instance, the “U.S. Farmers and Ranchers Alliance (USFRA)” is a front group that’s funded by biotech and chemical companies like DuPont, Dow and Monsanto and they spend about $10 million every year promoting the use of routine antibiotics in farm animals, GMOs, and the safety of chemical synthetic pesticides. They have reportedly trained at least 8,500 farmers and ranchers in 22 states with a spokesperson training program where “participants learn how to engage with consumers, using USFRA talking points and research on consumer attitudes”. These trained spokespeople have been quoted in the media without any disclosure of their ties to this group. For example, this article was published in the Star Tribune listing the author simply as “Suzanne Vold is a Minnesota dairy farmer and mother of three”, when she was actually a trained public messenger for USFRA.

They want you to think yoga mat chemicals in our food are safe!

Marketing messages from the front group “Center for Food Integrity (CFI)” are making their way into the media as well. Their members include the National Restaurant Association (which includes Subway as a member), the American Farm Bureau Federation, and companies like Monsanto and Tyson, with a primary mission to downplay any public concerns about chemical food additives:

“When issues arise, teams are activated to determine how to engage. For example, when Subway responded to pressure from the blogger known as Food Babe and announced it would stop using azodicarbonamide in its bread, an Issues Advisory Team acted quickly to add unbiased, fact-based information to the conversation.” – Center For Food Integrity, August 2014

This is an example of why I have been heavily attacked for campaigning for the removal of food additives – additives that are banned or regulated in other countries because of health risks. They accuse me of all sorts of things – “I’m not qualified”, “I’m not a scientist”, they dig up old errors on my blog that I have removed or corrected and they bring it up over and over again as a way to discredit me. The truth is (as many of you have seen through my campaigns) there are plenty of scientists and consumer organizations (including my advisory council) that back my work and there is a mountain of evidence that synthetic, carcinogenic and neurotoxic insecticides are bad for human health and the environment.

The food and chemical companies will do anything to win over women.

I’m sure you saw or heard about the Monsanto ads that were plastered all over women’s publications like Shape, Parents, and O Magazines earlier this year. They use several tactics like these to get their messages into the public eye, but they mainly target a female audience, because women “account for over 70 percent of consumer spending and are responsible for most food purchasing decisions”. The website “SafeFruitsAndVeggies.com” is funded by the Alliance for Food and Farming (the front group mentioned above that fights for conventional agriculture), and has a huge “MOM’S DESERVE THE TRUTH” banner on their front page, which also links to a “mommy-blogger” post that defends their stance against EWG’s pesticide guide.

MORE on FoodBabe Blog by Vani >>