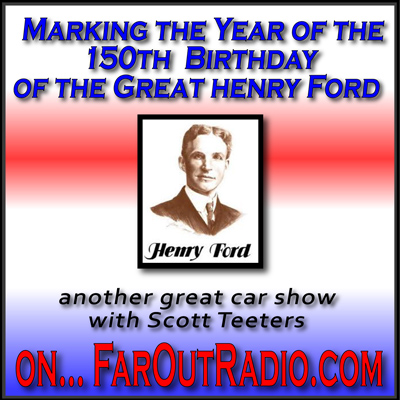 Listen to archived show HERE.  It’s another Car Show on Far Out Radio!  July 30th 2013 would have been Henry Ford’s 150th birthday! Time has a funny way of making what was once breakthrough technology commonplace, such that it’s no longer considered special. Ford historian, Bob Kreipki with the Henry Ford Museum is our guest this program.
Since the Industrial Revolution began, almost every advancement that people have made has become commonplace. Thanks to the fact that the Ford Motor Company carries Henry Ford’s name, Mr. Ford will not be forgotten.

But many of the breakthroughs Ford and his team of inventors and engineers forged, have become so commonplace, “how” they came to be has become forgotten.

Henry Ford did not invent the first true automobile. That credit goes to Karl Fredrick Benz in 1885. (Robert Anderson from Scotland built an electric carriage in 1832. Nicolas-Joseph Cugnot from France built a 2.5-mph, steam-powered tractor in 1769. And Leonardo da Vinci created design sketches for self-propelled transport vehicles in the 15th century!) But in the same way that Steve Jobs. Steve Wozniak, and Bill Gates didn’t invent the personal computer but took it to a whole unexpected level; Henry Ford created a way for the average man (like Henry) to own an affordable horseless carriage.

But it didn’t stop there. In retrospect, Henry was off to a fantastic start. In 1891, at the age of 28, he was hired as an engineer with the Edison Illuminating Company. Two years later in 1893 the young Ford was promoted to chief engineer. Then in 1896 Ford was finally introduced to Thomas Edison.

In Henry’s spare time he was working on his own design for a self-propelled vehicle that he called the Ford Quadricycle. Edison approved of Henry’s extracurricular enterprise and was very encouraging. This would prove to be the beginning of a life long friendship between the two great men.

Like nearly all of the early car companies, Ford’s rise to fame was a not a straight line to success. “Tortuous” would be a more correct way of describing the process. But eleven years after the formation of The Ford Motor Company, sales of the 1914 Model T were over 250,000 units. When Ford dropped the price to $360 for the basic car, sales rose to 472,000 units! And by 1927, Ford had produced over 15,000,000 Model T cars. A record that stood for the next 45 years!

As they say, the rest is history. Along the way, Ford raised the daily worker’s wage from $2.34 to $5.00, they initiated the 6-day, 48-hour work week that became a 5-day 40-hour work week by 1926. Other innovations that are today taken for granted include the assembly line, the inexpensive V8 engine, consumerism as the key to peace, the franchise system, profit sharing, easy financing for the consumer, and more.

Like the pioneers of the personal computer, were it not for Henry Ford, the American car culture (something we are known for around the world) most likely would have taken a very different path and would not look like it does today.

This program we take a look at a true American industrial and cultural legend, Henry Ford. – Scott

So, let’s take a ride down Memory Lane. Enjoy the ride and Don’t Speed!