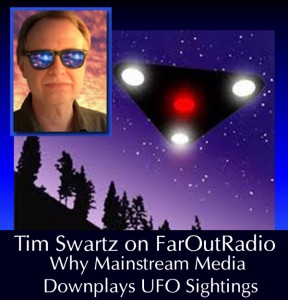 8.13.14 Now on YouTube.. FarOutRadio is honored to present our regular and always popular  guest, Tim Swartz, Independent Investigative Analyst, Paranormal Researcher and author of many books.

Topic: Why does the American mainstream media give UFO stories such shabby treatment? Tim recently wrote an article titled, “Reporting On UFOs: How the Mainstream Press Avoids UFO Stories” and you can read the complete article here… http://uforeview.tripod.com/ufosandpress.html We touched upon the ABC News UFO Special from 2005 with Peter Jennings and how it compared with the Kingman, Arizona UFO Crash of 1953, and the 1897 Aurora, Texas Airship Incident. The Aurora, Texas story was especially interesting because this was in 1903 – six years after the Aurora incident.

Earlier this week Tim was telling me about an interesting guest he had on his “The Outer Edge” weekly radio show he does with Mike Mott. Harry Drew was their guest and he had a very cool story about the UFO crash in Kingman, Arizona. The incident was very well reported in the local newspapers. Actually, refreshingly well reported.

This is what now passes as “journalism.”

But that kind of UFO coverage wasn’t always the case,   Tim Swartz shares with us  his thoughts as a researcher and a man with media field experience. Why does today's mainstream media feel they have to belittle genuine UFO sightings?

Reporting on UFOs – How the Mainstream Press Avoids UFO Stories 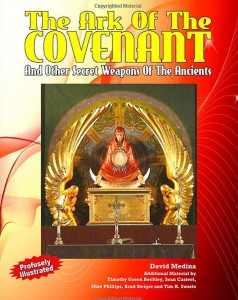 Purchase the Kindle version of the Tim's latest book, The Ark of the Covenant, on Amazon HERE.