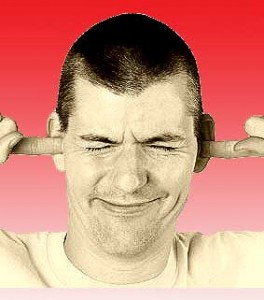 RESPONSE: "Conspiracy Theorist? Now tell me the truth, where did you hear that term…on TV? (Laugh.) …So let me get this straight. Are you saying that men in high positions of power are not capable of criminal activity and telling lies to the general public? Are you really that naive?" (Laugh as you say this.)
"I'm not saying that governments don't lie, but a conspiracy like that would have to involve hundreds of people. You can't hide something like that."
RESPONSE: "You're absolutely right. I agree with you 100%. It is impossible to totally cover up a conspiracy so massive. That's why I know about it! What you must understand is that they don't have to cover it up totally. Even a bucket that has a few  leaks can still do the job of carrying water from here to there! They only need to fool 80% of the public, which isn't hard to do when you control the major networks and newspapers. The 10-20% that do figure it out (and the fewer still who will dare to speak their minds about it) can be very easily marginalized with the propaganda label "conspiracy theorist." The 80% +  never take us critical thinkers seriously because they want to be part of the majority. This is known as groupthink. (*Note: When saying "conspiracy theorist", always hold your two hands up as you make sarcastic quote marks with your fingers.)

(The Ridicule Trick) "That's ridiculous (as he rolls his eyes). Do you really believe that nonsense?"
RESPONSE: "Can I ask you an honest question?" (Wait for "yes") Do you consider yourself an open minded, critical thinking person – yes or no? (Wait for "yes")  Then how can you possibly ridicule an opinion when you haven't even done 10 minutes of research into the matter? That's kind of ignorant don't you think?" (Wait for response.)

"Not everything that happens in the world is a conspiracy!"
RESPONSE: "Not everything is a conspiracy, but nor is NOTHING a conspiracy either. Wouldn't you agree that we should evaluate each case independently and with an open mind?" (Wait for response.)
"Governments are so incompetant that they can't even deliver the mail on time or balance a budget. They couldn't conspire their way out of a paper bag!".
RESPONSE: "Don't confuse your incompetant, dim witted Congressman or Senator with the shadow government. The dark covert elements who stage these events are very skilled at carrying out, and concealing, their plots. Take for example the Manhattan Project. Hundreds of the world's top scientists were holed up in a desert for months as they worked on the Atomic Bomb. More than 100,000 people, each sworn to silence, worked on the project in 3 secret cities. A test bomb was even detonated in the the desert and not one word was said about it! This conspiracy was so secretive, that when FDR died and Vice President Truman became President, FDR's advisors had to inform him of the Project's existence! So you see, the shadowy intelligence element of the government is VERY capable!"
(The Unresolved Detail Trick) "If this is a conspiracy then explain to me how they managed to do x, y, and z?"
RESPONSE: "I don't have every missing piece of this puzzle. But I have enough pieces to KNOW that the government-media version is false! Imagine if I gave you a 100 piece jigsaw puzzle, and told you that the image is of a beach in Hawaii. But after snapping 30 pieces together, you notice polar bears, snow capped mountains, and men covered in furs. Although there are still 70 missing pieces, you already have enough to KNOW that the image is NOT that of a beach in Hawaii. It's the same with solving conspiracies. I may not have all of the details, but I have laid out enough pieces to know that the official story is a lie. Does that make sense to you? (Wait for response.)
"So what? just because "x" happened, or "y" said this, it doesn't mean it's a conspiracy. You're taking a few coincidences and making a conspiracy out of it. "
RESPONSE: "If it were just one or two coincidences, I would agree with you. But when you have a series of 10,15, 20 different anomolies, the law of statistics PROVES that they can't all be just "coincidence". For example, if we're playing dice, and I roll a "7" to win. That doesn't mean that my dice are rigged. It's just a 1 in 6 coincidence. But if I roll a "7", eight times in a row, then that's a 1 in 150,000 "coincidence". You would have to be a fool not to question the integrity of those dice! You do understand probabilities don't you? (Wait for response.)
(The Isolated Piece of Evidence Trick) "Other than citing some historical events, you still haven't shown me one piece of evidence that this was a conspiracy. Tell me just one thing that most proves a conspiracy."

RESPONSE: "That's a trick question! If I tell you "just one thing", you'll just climb on your high horse and dismiss it as a "coincidence". What I want to show you is TWENTY THINGS! But you're too closed minded to consider the case in its totality! You won't even watch a You Tube video let alone read the case! I sure hope you never get selected to serve on a jury! You want everything boiled down to a simplistic media sound byte. Unless you will commit to a few hours of study, I'm wasting my time with you. Why are you so afraid to study this? (Wait for a response.)
"If this were true, the media would be all over it! It would be on the front page of every newspaper in America."
RESPONSE: "The media, the government, the International bankers, Hollywood, and academia are all part of the same incestuous complex. The media is part of the conspiracy, so why would you expect them to tell you the truth?" (Wait for response.)

"You wouldn't be able to corrupt so many people. Every reporter and politician would have to be "in on it" in order to cover it up."
RESPONSE: "The corruption doesn't come from the outside-in. It comes from the top-down. If the ownership of a major media organization decides that a certain story is to be spiked, or if another story is to be hyped, then the rest of the organization follows. If a low level reporter decides to defy his bosses, he will lose his job and be blacklisted. Remember Helen Thomas? After 50 years as a White House Correspondent, she was dumped like a hot potato for publicly criticizing Israel. The same fearful top-down control works in government and academia as well.
"This is crazy. I don't believe in conspiracy theories."
RESPONSE: "You don't believe it? Or You don't WANT to believe it? There's a big difference between the two. The human mind is filled with complexes, one of which is the desire to shield itself from unpleasant truths. You're afraid that if you look into this, you might see that it's true. And you're especially afraid that if you come to agree with me, you too will then become marginalized as a "conspiracy theorist." It is FEAR that is causing you to close your mind and act like a sheep. Grow a pair and stop being so closed minded!"
"Conspiracy theories appeal to uneducated people because they provide simplistic answers to complex events."
RESPONSE: "Exactly the OPPOSITE is true! The evaluation of conspiracy theories not only requires much time and study, but also applied logic and critical thinking. Did you know that Henry Ford, Thomas Edison, and Bobby Fischer all believed in the "one-world conspiracy theory"? Were those men stupid? No, it is intellectually lazy people like you who choose to swallow and parrot whatever simplistic narrative that the TV feeds you. Do you ever question anything that the TV feeds you?" (Wait for response.)
"Conspiracy theories appeal to people because they are comforting."
RESPONSE: "Exactly the OPPOSITE is true. It is far more comforting to believe that certain tragic events happen exactly as the TV says, than to believe in monstrous internal plots beyond our control. Do you actually think that I enjoy believing that such evil exists? You think I like being ridiculed by simple minded family members and friends? Take it from me, the life of a "conspiracy theorist" can actually be quite stressful at times!"
"Don't believe everything you read on the Internet."
RESPONSE: "I don't believe everything that's on the Internet. But apparently you believe everything that's on the Idiot Box! I only believe those things which are verifiable, and consistent with my own sense of reasoning and logic. The beauty of the Internet is that, unlike the TV that you worship so much, all sides of an issue are presented on the Internet. It allows a critical thinker to figure out what the true story is. The TV doesn't give you that option. Do you really believe that the media presents the whole story? Are you that naive? (laugh) Remember the fairy tale of the 'weapons of mass destruction' in Iraq? The media shoved that lie down our throats. So why do you trust the media so blindly and not the Internet?"
(Wait for response.)
"Some conspiracy theorists still believe Elvis is still alive."
RESPONSE: "So, according to your twisted logic, because some theories are false, therefore ALL theories are false? I'm astonished that you could make such a stupid and offensive anology! Is that the best you got?" (Wait for response.)
"You don't have any respect or compassion for the family members of the dead."

RESPONSE: "I am honoring the dead by pursuing the truth as to who killed them! If someone in your family was killed, wouldn't you want to know who the true culprit was?" (Wait for response.)