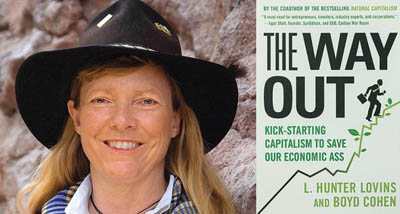 When capitalism hit the fan in 2008, it left a lot of us thinking that there must be a better way—one that takes into account not only financial success but human values that benefit and safeguard our communities and the environment. What you may not know is that this better way is already here.

Author, economist, professor and attorney Hunter Lovins has been practicing and advocating a more harmonious version of capitalism for decades. “I think I helped invent the field,” Lovins told Organic Connections when asked how she got into sustainable economics. “The word sustainability entered the English language the year I graduated college. I had planted a tree two years before for the first Earth Day and had been working on these issues, starting in the fifties with fair housing, and the sixties with civil rights and the environmental movement. I worked with Dave Brower [first executive director of the Sierra Club and founder of Earth Island Institute] in 1968. So this is not something that I’ve just cometo.”

Lovins’ seminal work, Natural Capitalism, was published all the way back in 1999. Her movement under the same name, along with her foundation, Natural Capital Solutions, has been garnering major attention and interest from both business and government sectors ever since. Over 13 years, 14 books, dozens of major television and film appearances, and countless speaking engagements later, Lovins still travels the world consulting heads of state, the United Nations and major corporate CEOs, as well as speaking and teaching at universities. At the time we interviewed her, she had just visited ten cities in the previous five days, and was shortly to be going right back out again from her home ranch in Colorado.

“What we’ve sought to do is to put forth the argument that there is a business case for behaving more sustainably,” Lovins said. “Just over a decade later these principles are coming to be accepted, and that business case has only become stronger. There are now 47 separate studies from groups such as Goldman Sachs showing that the companies that are the leaders in environmental, social and good governance policy have the fastest growing stock values and are well protected from value erosion even in a down economy.*

“This clearly indicates that behaving as if you care about the earth and its people is simply better business. If this were just coming from the likes of me or the Sierra Club, you could say, ‘Well, it’s just those enviros again.’ But it’s not—it’s all of the big management consulting houses as well as Harvard Business School and the MIT Sloan report. Sustainability is better business.”

The Cornerstones of Sustainable Management

Lovins’ proposed cornerstones of sustainable business management are somewhat simple, yet vastly profound in their implications.

“The first is efficiency,” Lovins explained. “This means that any resources taken from the earth or borrowed from the future are used far, far more efficiently. But all this does is buy time to implement more sustainable measures.

“Then we’re going to redesign how we make and deliver all products and services, using approaches like biomimicry and Walter Stahel’s cradle-to-cradle strategy, which eliminates the concept of waste; and the circular economy, now being adopted by the Chinese as the basis of their industrial policy.” This program implements the reuse and service-life extension of goods for the prevention of waste, creation of regional jobs, and resource efficiency.

“Third, manage all institutions to be restorative of human and natural capital,” Lovins continued. This of course means that enterprises not only put back that which might be taken from the environment but contribute to and enhance the forms of capital our current system is liquidating.

“These Natural Capitalist principles, set forth over a decade ago, remain the best approach to managing a company for profitability and for preservation of life as we know it on the planet.”

Lovins sees businesses operating this way as something that is not just beneficial but vital. Time is running out for our environment. “Scientists such as Dr. Tom Lovejoy—reporting from the Smithsonian’s Global Biodiversity Outlook 3 convention—state that all ecosystems on the earth are in trouble, and three of them are tipping into collapse,” Lovins related. “If nothing changes, by perhaps as early as 2050 there will be no living coral reefs on planet Earth. The oceans are acidifying. This is serious, not just because we might like to eat oysters, but because those little calciferous critters called phytoplankton cannot retain the integrity of their shells in an acid ocean. They provide about half the oxygen on Earth.”

“The International Energy Agency reckons that around the world we spend $550 billion every year subsidizing fossil energy. Until we realize that we need to make a shift to renewable energy, we’re going to continue to kill the planet. [Author, educator and environmentalist] Bill McKibben’s numbers are really stark. The fossil fuel companies own in the ground, ready to drill or dig up and burn, 2,795 gigatons’ worth of carbon emissions. The earth can withstand the release of 565 more gigatons before we lock in a global temperature increase of 2 degrees centigrade. Their business model is to roast the earth if we let them do it.

Given such dire predictions, there is some comfort in finding out that there are major real-world examples of sustainable business practices already in prominence. “Patagonia is a pretty good example,” Lovins reported. “Founder Yvon Chouinard has said, ‘We’re not a sustainable company; we’re just trying to do the best that we can.’ He says, ‘Don’t buy more of my product; use the ones that you have—recycle them, repair them, send them to us and we’ll repair them.’ They even took out a full-page ad in the New York Times for their brand-new jacket they had introduced, saying, ‘Don’t buy this jacket’! His company is growing at about 30 percent a year. He has made his entire supply chain transparent, showing where his materials come from and committing to run his company in as environmentally responsible and socially responsible ways as he can.

“Another example is Unilever. I’ve just joined their advisory board because they are the company, I think, that is doing the most to drive this kind of thing forward now. Their CEO, Paul Polman, has announced that they are going to cut their environmental impact in half by 2020, source from sustainable agriculture everything that comes from anything grown, and lift a billion people out of poverty.”

The military has even seen the crucial importance of adopting such policies. “Secretary of the Navy Ray Mabus has said he is building the ‘Great Green Fleet,’” Lovins added. “The navy will be half renewable by 2020. They’ve already run frigates, the F/A-18 Super Hornet and helicopters on biofuels. Biofuel is, in this case, derived from what are called lipid algae; these are algae that have more oil density per acre than corn; so we can leave corn to be grown as it should be—locally, organically, and without GMOs.”

Given the urgency of the situation, despite 30-plus years of promoting and consulting on her strategies, Lovins isn’t slowing down anytime soon.

“I’ve spent a lot of time going around the planet working with companies, and now increasingly with countries,” said Lovins. “I’m consulting with the king and prime minister of Bhutan on the concept of gross national happiness, rather than measuring things in gross national product. I’m advising the United Nations; they’re putting together a new set of development goals to deal with what will come after the Millennium Development Goals. I’m helping them to realize there’s a business case here that is not just a good moral cause but a better way of doing business and making money.”

Lovins’ counsel with the king of Bhutan and the United Nations is as part of a new organization that she’s helped launch called ASAP (Alliance for Sustainability and Prosperity). “This is an international expert working group composed of 150 or so of the brightest sustainability leaders from around the world—people like ecologist-economist Dr. Robert Costanza, who heads it up, and renowned author and activist Frances Moore Lappé. We’ve got people from Europe, Africa, Asia and many other places, and we’re all working on what exactly it’s going to take to do this.”

Lovins has also continued her output as an author. “My latest book is called The Way Out: Kick-Starting Capitalism to Save Our Economic Ass,” she chuckled. “It brings the subject of Natural Capitalism into present time and once again walks through why these principles are just better business. It’s what you do even if all you are is a climate-change-denying, profit-maximizing capitalist.”

Lovins sees a measure such as “gross national happiness” being implemented in Bhutan as integral to the cause, and other such metrics are required as well. “For the global transformation of the economy, we must have full cost accounting,” she said. “If you’re going to do anything that hurts the earth or people, you pay for it; you count it into the cost of doing business. We then make policy decisions to achieve measures of what it is we want more of, like happiness. Gross national product is simply a summation of the speed at which the economy works, not whether or not we’re getting any better off. For example, a divorcing cancer patient who gets into a car wreck has added to the gross national product. But is she any better off? Clearly not.

“There are such metrics in the US. Seattle was the first city to create its own measures. The people asked, ‘What would tell us if we’re getting better off?’ They decided on indicators like the birthrate of babies, number of salmon in the rivers, and numbers of farmers’ markets. They established measures they would start counting to tell them if they were better or worse off. Any community can do this. The international organization ISIN—International Sustainability Indicators Network—based out of Canada, can help any community get started.”

Everyone Has a Part

Lovins, like others with such a sweeping viewpoint, sees responsibility everywhere. “It even comes down to individuals and communities,” she concluded. “What you do at home matters. It is all of us banding together at the local level, knowing where our food comes from, where all of our necessities come from, and ensuring that we are meeting our needs sustainably and locally.

Hunter Lovins’ books Natural Capitalism and The Way Out: Kick-Starting Capitalism to Save Our Economic Ass are available from the Organic Connections bookstore.