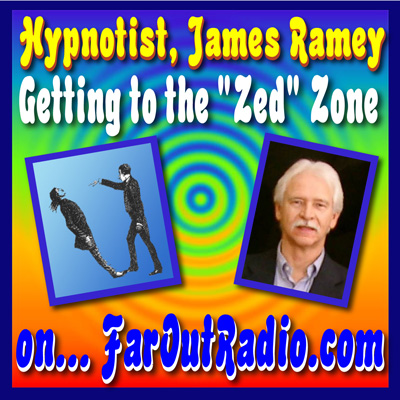 Certified Hypnotist, Jim Ramey is back for another visit. Jim was on the program recently to share with us his hypnosis technique called, “Ultra Depth® Process.” Ramey’s teacher, Walter Sichort, discovered this technique in the mid ‘60s. Sichort had many students, but Jim was one of his closest and took the Ultra Depth technique to the next level.

This program Jim explains the highly unusual “Zed State.” When a subject in the Zed State, verbal communication and interaction is possible with one or more of the subject’s past life personalities.

Specifically, it is the Sichort State that is the same level of consciousness that the great seer, Edger Cayce tapped into when he performed his readings.

In Jim’s first visit, we focused on the history of hypnosis, Jim’s hypnosis teacher, Walter Sichort, and the basics of how Jim now practices his Ultra Depth process.

To listen to Jim Ramey’s first visit on Far Out Radio, CLICK HERE.

Jim Ramey explains, “This state is only used to achieve the most profound regressions you could ever imagine.  It is not like normal regressions where the subject is recalling an experience instead, it enables the actual personality from another time to come forward; open the physical eyes of the present body and exhibit behavior as though they are seeing both the past and present at the same time; speak not only in the language but also the dialect they spoke in that time; move the upper torso of the subject's body and dialogue with the practitioner.”

This will be a VERY interesting conversation!

Jim Ramey has been in the field of hypnosis since the early ‘70s and offers online courses and mini-courses, live training courses and workshops. For course and workshop info, visit http://www.UltraDepth.com/