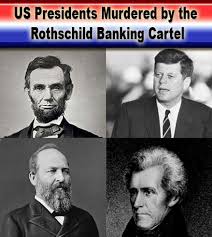 There have been four presidents in U.S. history whose terms were cut short by assassins. The history books give various accounts as to why these incidents happened and vilified all the shooters; all of whom can best be described as patsies. Despite the social and political issues normally cited when referencing these four commanders-in-chief, they all have one thing in common: their disdain for central banks

Nicknamed "Honest Abe" and "The Great Emancipator," Abraham Lincoln was the first Republican president ever elected to the White House. His life and presidency were cut short on April 15, 1865, when he succumbed to a bullet wound to the back of his head. The story normally told is that John Wilkes Booth, the assassin, was a Confederate sympathizer and was angry with Lincoln for freeing Africans from slavery.

The United States, in 1862, was coming off what is known as the Free Banking Era from 1837-1862. President Andrew Jackson, who survived an assassination attempt of his own on January 30, 1835, vetoed the renewal of the 20-year charter for the Second Bank of the United States — which was controlled by international bankers. Keep in mind, the charter for the First Bank of the United States expired in 1811. When Congress refused to renew it, the War of 1812 commenced just a few months later. It was the first time since the end of the Revolutionary War that a central bank controlled by foreign bankers did not control U.S. currency.

Lincoln, who desperately needed additional funding to fight the Civil War, got Congressional approval to print "greenbacks" directly from the U.S. Treasury. The National Banking Act of 1863, allowed other National Banks to print these interest-free dollars as well. In other words, Lincoln circumvented the Bank of England by printing his own money. The Confederacy, on the other hand, confided in European international bankers to fund their cause. Though there is much more to this, Lincoln was simply a nuisance to the banksters and had to be eliminated. To illustrate the lengths the powers-that-be will go to hide Lincoln's anti-bankster beliefs, there is not one occurrence of the word "greenback" on Lincoln's Wikipedia page. Some have speculated that the movie "Abraham Lincoln: Vampire Hunter" depicted the banksters as the blood-suckers Lincoln hunted.

Lincoln, however, never took an Indiana, Kentucky, or Illinois hunter course and is said to have only hunted rabbits, squirrel, and other small game.

President Garfield became only the second president to be assassinated in office, when he was shot on July 2, 1881 (he died six weeks later). A widely distributed quote from Garfield two weeks before his assassination explains why patsy Charles J. Guiteau pulled off the deed: "Whoever controls the volume of money in our country is absolute master of all industry and commerce…the entire system is very easily controlled, one way or another, by a few powerful men at the top." Some have questioned the validity of the quote, but according to Garfield's biographer Allan Peskin, he did in fact adopt anti-inflation policies and worked to contract the money supply throughout his presidency.

The panic of 1893, allowed J.P. Morgan, one of the original banksters, to bail out the entire industry, merge all the different companies, and create a monopoly for himself. A few years later, he also bought up and merged all American steel companies. Though President McKinley's campaigns were funded mostly by Morgan, he started to have a change of heart about his policies during his second term. His Gold Standard Act of 1900 would ultimately curtail the "free money" printed by central bankers such as Morgan, and would control inflation. He was shot twice in the abdomen in Buffalo, New York, by Leon Czolgosz on September 6, 1901. He died a week later.

The Lee Harvey Oswald/magic bullet theory tied to JFK's death has been long debunked by movies and common sense. Kennedy's biggest impact on America as a whole was his signing of Executive Order 11110 on June 4, 1963. It gave the U.S. Treasury the power to print its own debt-free money for the first time since the Federal Reserve Act of 1913. This would obviously interfere with the Fed's currency monopoly in the United States. Kennedy was shot dead five months later.