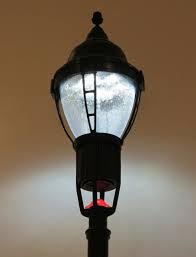 by Mikael Thalen as republished from StoryLeak. The Las Vegas Public Works Department has begun testing a newly installed street light system around City Hall with wide-ranging capabilities including audio and video recording.

According to the Michigan based “Illuminating Concepts,” the system’s main benefits include “energy management, security and entertainment.” The Las Vegas setup includes such features as emergency notification flashers, playable music and a sound announcement system, all controlled from an Ipad.

“Actually, there’s a server that’s housed by the company that’s providing this product and we’re communicating with just a wireless, wi-fi connection,” Neil Rohleder of the Public Works Department told My News 3.

The company’s lights, which also offer a “Homeland Security” feature, received major backlash in 2011 following reports of the system’s federally-funded roll out across the country. The feature allows for emergency government announcements which will likely include such slogans as “See Something, Say Something” as well as other irrationally fear-based messages already seen in Wal Mart’s DHS-run “telescreens.”

Local privacy advocate Daphne Lee has begun speaking out against the system, pointing to the ever-increasing surveillance dragnet cast over everyday innocent Americans.

“This technology, you know is taking us to a place where, you know, you’ll essentially be monitored from the moment you leave your home till the moment you get home,” said Lee.

The Public Works Department claims they have no plans to use the system’s surveillance cameras… for now, leading many to believe the plan is already well underway as city-wide implementation is discussed.

“Right now our intention is not to have any cameras or recording devices…it’s just to provide output out there, not to get any feed or video feed coming back,” said Public Works Director, Jorge Servantes.

In light of the TrapWire system, a sophisticated program that uses advanced facial recognition software through regular CCTV surveillance cameras across the country, the likelihood of the city’s cameras being covertly used by the federal government, or with permission, remains a likely outcome.

Talking street lights have already been implemented in parts of Europe for a number of years. Apartment residents in North London were shocked to discover cameras ordering them to stay away from their communal garden, warning them that their photograph was being taken for entering a “restricted area.”

“At what point do we say this is the land of the free? People have a right to a reasonable amount of privacy,” Lee added.

As new NSA revelations widen the general public’s understanding of just how pervasive the surveillance state has become, the real question lies in whether or not the public will demand accountability as well as their privacy rights.