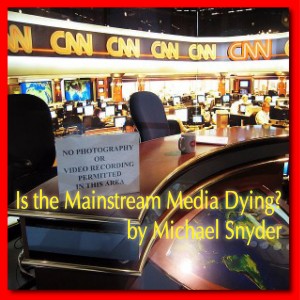 Ratings at CNN, MSNBC and Fox News have all been plummeting in recent years, and newspaper ad revenues are about a third of what they were back in the year 2000.  So is the mainstream media dying?  Despite what you may have heard, the mainstream media is certainly not completely dead just yet.  The average American watches approximately 153 hours of television a month, and as I pointed out in a previous article, about 90 percent of the "information" that is endlessly pumped into our heads through our televisions is controlled by just six gigantic media corporations.  However, there are a whole host of signs that things are changing – especially when it comes to news.  More Americans than ever are losing faith in the establishment-controlled media and are seeking out alternative sources of information.  Is this a trend that the big media companies are going to be able to reverse at some point?

For years, the "news business" has been dominated by CNN, Fox News and MSNBC.  But now all three channels are rapidly losing viewers.  According to a recently released Pew Research study, the number of prime time viewers for all three networks combined fell by 11 percent last year…

In 2013, the cable news audience, by nearly all measures, declined. The combined median prime-time viewership of the three major news channels—CNN, Fox News and MSNBC—dropped 11% to about 3 million, the smallest it has been since 2007. The Nielsen Media Research data show that the biggest decline came at MSNBC, which lost nearly a quarter (24%) of its prime-time audience. CNN, under new management, ended its fourth year in third place, with a 13% decline in prime time. Fox, while down 6%, still drew more viewers (1.75 million) than its two competitors combined (619,500 at MSNBC and 543,000 at CNN).

And the decline is far more dramatic when you look at just the key 25 to 54-year-old demographic.

Is this a sign that Americans are finally getting fed up with the endless propaganda being spewed by those establishment mouthpieces?

A recent survey conducted by a liberal polling firm would indeed seem to indicate that this is the case.  That survey found that only 6 percent of Americans consider MSNBC to be their most trusted source for news…

NBC News and sister cable network MSNBC rank at the bottom of media outlets Americans trust most for news, with Fox News leading the way, according to a new poll from the Democratic firm Public Policy Polling.

In its fifth trust poll, 35 percent said they trusted Fox news more than any other outlet, followed by PBS at 14 percent, ABC at 11 percent, CNN at 10 percent, CBS at 9 percent, 6 percent for MSNBC and Comedy Central, and just 3 percent for NBC.

And of course it is not just the big mainstream news networks that are in decline.

The Newspaper Association of America has stopped compiling quarterly reports on advertising revenue. According to its annual numbers, which were released in April 2014, overall revenue for newspapers in 2013 was $37.6 billion, a decrease of 2.6% from 2012. Within that total, combined print and digital ad revenue decreased by 7%—to $20.7 billion.

Seven percent may not sound like much, but you have to realize that these declines have been happening year after year.  When you look back over a longer time frame, it really puts the massive decline that we have witnessed in advertising revenues in perspective…

Even when revenues from digital advertising and other categories described by the NAA as “niche publications, direct marketing and non-daily publication advertising” are added to print ad revenue (see red line in chart), the combined total revenues for print, digital and other advertising last year was still only $23.56 billion in 2013 dollars, which was the lowest amount of annual ad revenue since 1954, when $23.3 billion was spent on print advertising alone.

Yes, you read those numbers correctly.  As you can see from this chart, newspaper ad revenues are now about a third of what they were back in the year 2000.

That is not just a "shift" – that is a massive tsunami.

Needless to say, the big newspapers are quite distressed by all of this.

For example, "the Grey Lady" herself is essentially in a state of panic at this point.  Just recently, a 96 page internal New York Times report was obtained by BuzzFeed that basically skewers the company's current strategy when it comes to the Internet…

A 96-page internal New York Times report, sent to top executives last month by a committee led by the publisher’s son and obtained by BuzzFeed, paints a dark picture of a newsroom struggling more dramatically than is immediately visible to adjust to the digital world, a newsroom that is hampered primarily by its own storied culture.

But they still don't understand the true cause of their decline.

It isn't the fact that they haven't adapted to the Internet very well that is the primary reason for their decline.

Rather, it is the fact that the American people are losing faith in the New York Times and other similar establishment mouthpieces.

News magazines are also experiencing a dramatic multi-year decline.  Ad revenues are way down across the entire industry, and any publication that can keep their yearly losses to the single digits is applauded for it…

For a third year in a row, news magazines faced a difficult print advertising environment. Combined ad pages (considered a better measure than ad revenue) for the five magazines studied in this report were down 13% in 2013, following a decline of 12.5% in 2012, and about three times the rate of decline in 2011, according to the Publishers Information Bureau. Again, hardest hit was The Week, which suffered a 20% drop in ad pages. The Atlantic fell 17%, The Economist 16%, and Time about 11%, while The New Yorker managed to keep its ad pages losses in single digits (7%).

Mainstream media executives appear to be optimistic that they can reverse these declines at some point, but they simply don't realize that there has been a fundamental paradigm shift when it comes to the news media in the United States.

The general population has lost a tremendous amount of faith in the mainstream media.  They are increasingly becoming aware that it is deeply controlled by the establishment.

At this point, the charade is so out in the open that even reporters are talking about it.  For example, former CBS reporter Sharyl Attkisson says that the "influence on the media" by political and corporate interests is "unprecedented"…

"There is unprecedented, I believe, influence on the media, not just the news, but the images you see everywhere. By well-orchestrated and financed campaign of special interests, political interests and corporations. I think all of that comes into play."

Remember, this is not just some outsider that is saying these things.  Attkisson worked in the industry for more than 30 years.

And the American people know that they are getting very little truth from the establishment media these days.  A recent Gallup survey found that only 23 percent of Americans have a great deal of confidence in the mainstream media at this point.  Increasingly, Americans are turning to other sources for news and information.

This is fueling an unprecedented alternative news boom, and more Americans than ever are relying on the Internet as their main source of news.  If you doubt this, just check out this chart.

30 years ago, you would have never been able to read this article.  It never would have gotten past the gatekeepers that had almost total control over what Americans read, watched and listened to.

But now things have changed.  The Internet has allowed ordinary Americans to communicate with each other on a scale that has never been possible before.  As we share information with each other, we are increasingly becoming aware that we don't need the mainstream media to define what reality is for us after all.

If the mainstream media really wants to keep from dying, they should at least try to start telling us the truth.

Unfortunately, that simply is not going to happen.  The political and corporate interests that control the big media corporations have way too much to lose.

So we will have to continue to learn to think for ourselves and to share news and information with each other over the Internet.

In the end, we will all be much better off being unplugged from "the matrix" anyway.