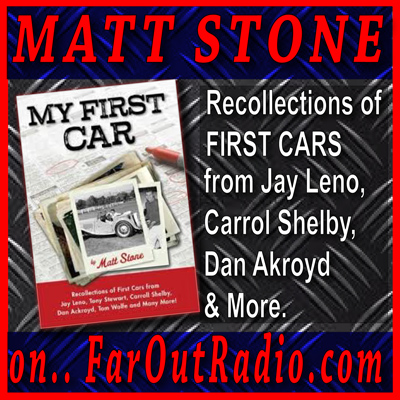 Listen to HR 1 HERE.  HR 2.  It’s a Friday Night Car Show on Far Out Radio! Automotive journalist Matt Stone is back with us for both hours this program. Matt and I spend time talking about his book, “My First Car – Recollections of First Cars From Jay Leno, Tony Stewart, Carroll Shelby, Dan Ackroyd, Tom Wolf, and Many More!” Unless cars have about the same importance for you as a toaster, nearly everyone remembers their “first car.”

Matt has been our guest several times before to talk about the cars and racing of actors Steve McQueen and Paul Newman, as well as an earlier visit along with Preston Learner to talk about their book, “Automotive Mysteries, Myths and Rumors Revealed.”

This program, we also cover current trends in the car culture from the latest hot rod muscle cars from Detroit and Asia, as well as trends at the car auctions.

America invented the “car culture” and even if you’re not a performance car, sports car, or racing buff, it’s hard to come of age in America without experiencing the right of passage called, “my first car.” Matt Stone’s “My First Car” is a collection of short essays about famous people from all walks of American life, recollecting their first car. For many, their first car is on the same level as their first love. Even if you’re not “into cars” these are stories that almost everyone can relate to.

When cars burst on the scene in America over 100 years ago, many did not like the new-fangled, noisy, smelly, difficult-to-use machines and swore that the new blight upon the landscape would never be accepted. But as the machines improved and became user-friendly, people began to experience that cars were just the latest means for freedom. Within a few decades, cars and the open road became the new American expression of freedom.

A description of the book, My First Car Recollections of First Cars From Jay Leno, Tony Stewart, Carroll Shelby, Dan Ackroyd, Tom Wolf, and Many More!, from the publisher, Motorbooks:

Everyone has a story about that first car. Whether it was new, a hand-me-down, or a junker, it was freedom on four wheels, independence, responsibility, and something that would always hold a special place in your heart.

Well, you're not alone. My First Car captures those wonderful moments of automotive initiation as they were lived by such luminaries as Jay Leno, Mario Andretti, Patrick Dempsey, Danica Patrick, Sir Stirling Moss, Gregg Allman, and more.

Accompanying many of these stories are photographs of the neophyte drivers with their first cars. For anyone who ever slid behind the wheel and tooled down the road for the first time, this wonderful book awakens memories of what it was like.

Matt Stone, freelance journalist, author, broadcaster, former Editor, Motor Trend Classic magazine. He has been a professional automotive journalist / photographer since 1990. Matt enjoys anything with four wheels, though demonstrates a particular passion for sports, performance, and racing cars. A California native, Matt Stone currently resides in Glendale, and still hopes to own a Ferrari Daytona, a Ford GT, and a Shelby Cobra 289. – Someday.

First car photos from the book: 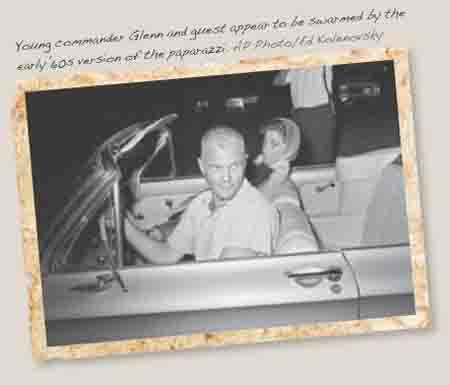 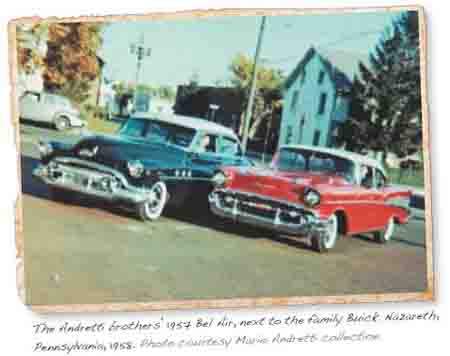 So, let’s take a ride down Memory Lane. Enjoy the ride and Don’t Speed!

Matt’s other books include…

“Automotive Mysteries, Myths, and Rumors Revealed,” “Winning – the Racing Life of Paul Newman,” “McQueen’s Machines – The Cars and Bikes of a Hollywood Icon,” and “365 Cars You Must Drive” – all available HERE. Matt’s book, “The Ferrari Phenomenon” is available HERE.

Matt Stone’s writing and photography can be enjoyed at, www.MattStoneCars.com.