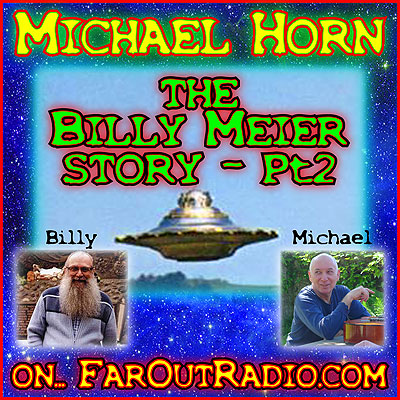 Listen HERE HR 1.  HR 2. Michael Horn makes a return visit to Far Out Radio. He’s the official American representative for UFO contactee, Billy Meier. Within the UFO experience, many people have sightings, others are abducted against their will, and a few are contacted. Billy Meier is one such contactee. There are three fascinating aspects to the Billy Meier story. First, Billy claims to have been contacted and taught by a group of extraterrestrials called the Plejarens.

These are “human” ETs and have been interacting with Billy since the age of five. Second, are Billy’s astonishing photographs of the UFOs that his extraterrestrial friends use to get to Earth. And third are the stunning prophecies and instructions Billy has received from his ET friends.

Michael Horn has been studying the Billy Meier story since 1979 when he saw a copy of the book, “UFO… Contact From The Pleiades Volume 1.” While the message in the book was profound, like most people that see the book, it was the photos that captivated Michael. This would be the beginning of a lifelong journey that continues up to today.

Michael Horn, as the official American spokes person for Billy Meier, and I will look into Billy’s prophetic messages, and the guidance he’s received from his Plejaren friends.

The Plejarens imparted likely events for Earth’s near future that Billy documented many years ago. This program, Michael Horn discusses some of the Meier prophecies. Of course, “prophecies” often sound outlandish when first pronounced and are usually brushed aside and forgotten. It is only years later when the prophecies are reexamined, that the weight of the statements becomes obvious.
Prophecies are rarely initially embraced, and Meier’s are no exception.

Be sure to visit Michael Horn’s excellent website, TheyFly.com

This conversation will definitely leave you saying, “Hmmm…”