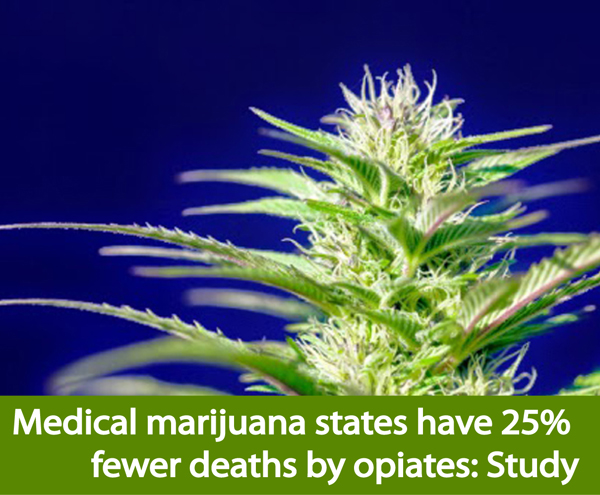 On average, states allowing the medical use of marijuana have lower rates of deaths resulting from opioid analgesic overdoses than states without such laws. Opioid analgesics, such as OxyContin, Percocet and Vicodin, are prescribed for moderate to severe pain, and work by suppressing a person's perception of pain.

A new multi-institutional study, published in JAMA Internal Medicine and led by researchers at the Perelman School of Medicine at the University of Pennsylvania, examined the rate of deaths caused by opioid overdoses between 1999 and 2010.

Results reveal that on average, the 13 states allowing the use of medical marijuana had a 24.8 percent lower annual opioid overdose mortality rate after the laws were enacted than states without the laws, indicating that the alternative treatment may be safer for patients suffering from chronic pain related to cancer and other conditions.

Approximately 60 percent of all deaths resulting from opioid analgesic overdoses occur in patients who have legitimate prescriptions. Additionally, the proportion of patients in the United States who are prescribed opioids for non-cancer pain has almost doubled over the past decade, indicating the need to do a more focused examination on the safety and efficacy of these and other treatment options. In states allowing the use of medical cannabis, the drugs may be prescribed as an alternative to opioids.

While noting that evidence for the pain-relieving properties of cannabis is limited, some studies have suggested "it may provide relief for some individuals," said lead author, Marcus A. Bachhuber, MD, Robert Wood Johnson Foundation Clinical Scholar at Penn and the Philadelphia VA Medical Center. "In addition, people already taking opioids for pain may supplement with medical marijuana and be able to lower their painkiller dose, thus lowering their risk of overdose.

Additional results of the study show that the relationship between lower opioid overdose deaths and medical marijuana laws strengthened over time; deaths were nearly 20 percent lower in the first year after a state's law was implemented, and 33.7 percent lower five years after implementation.

While safer treatment of chronic pain may help to explain lower rates of overdose deaths, medical marijuana laws may also change the way people misuse or abuse opioid painkillers, as marijuana and opioids stimulate similar areas in the brain's pathways. The authors suggest that as more states implement medical marijuana laws, future studies should examine the association between such laws and opioid overdoses to confirm their findings.

Press from University of Pennsylvania School of Medicine – See more at: http://www.naturalblaze.com/2014/08/states-with-medical-marijuana-have-25.html#sthash.UT619amW.dpuf