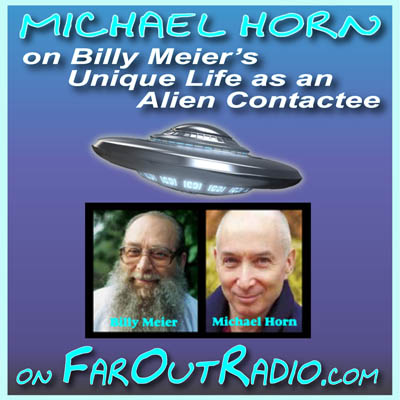 FarOutRadio Interview. Listen Hour One Here.  Hour Two Here.  Official American spokes person for Billy Meier, Michael Horn, continues Billy Meier's amazing story, with new documentation and developments from this one of a kind UFO contactee. We look at these new details as well as older controversies – the controversy over the photographs, the claims of Billy’s former wife, Billy’s prophetic messages, and the guidance he’s received from his Pleiadian (also known as Plejaren) friends.

Michael Horn as the official American representative for UFO contactee, Billy Meier, shares this amazing story and all its implications. Within the UFO experience, many people have sightings, others are abducted against their will, and a few are contacted.

There are fascinating aspects to the Billy Meier story.  Billy claims to have been contacted and taught by Pleiadian and Plejaren humans since the age of five. Another aspect is the existence of his astonishing photographs of the UFOs that his extraterrestrial friends use to get to Earth. And third, are the amazing prophecies and instructions Billy has received from his ETs friends.

Michael Horn has been studying the Billy Meier story since 1979 when he saw a copy of the book, “UFO… Contact From The Pleiades Volume 1.” While the message in the book was profound, the photos initially captivated Michael. This would be the beginning of a journey and a role of sharing and communicating that continues to this day for Michael. You can read all about this important Billy Meier contactee story at Michael Horn's site, theyfly.com.