The rabid, Lefty Liberal Lemmings snowflakes are nothing but a bunch of non-thinking, hate-filled phonies! 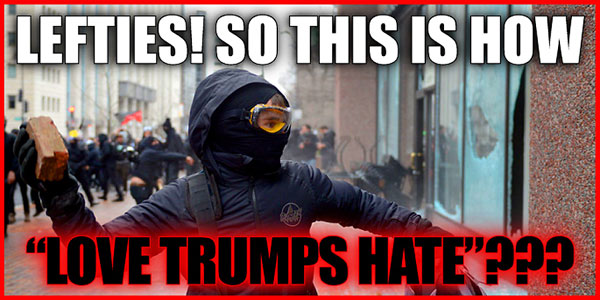 This is the same crowd that needed their “Safe Zones” with trauma counselors, cookies, hot cocoa, petting kittens and puppies, coloring books, aroma therapy and other “comfort tools.”. Now, they have a “cause,” something to focus their angst upon – President Trump, anyone connected with his administration, and his supporters.


They rally and protest, which is their right to do. Their main mantra (mantras are designed to put you into a linguistic trance) is “LOVE TRUMPS HATE.” (“Trumps” being a verb) That’s their moral high ground. The mantra is in the family of Mrs. Clinton and Mrs. Obama’s, “When they go low, we go high!” Another load of BULLIX.

Here’s why they are PHONIES.

While the “Ninjas”, all dressed up in their black Halloween costumes, were accosting Trump supporters, smashing anything in sight, breaking windows, setting fires, and well, RIOTING, the Lefty Liberal Lemmings just smiled and chanted, and did NOTHING to stop the violence.

No, they seemed to enjoy it

While viewing a video, I saw a Left Liberal Lemming set a young woman’s HAIR ON FIRE because she was wearing a Trump hat! Fortunately, one decent person put out the woman’s burning hair with her hands. The woman’s hair didn’t burn “much” but three seconds more and it would have GONE UP IN FLAMES! But “Love Trumps Hate.”

In another video, I saw a ninja punk spray something caustic in a woman’s face!

And we didn't hear a peep from the Feminists about “violence upon women”, either. I suppose it's okay if the woman victim is a President Trump supporter.

HERE’S THE WOMAN WHO WAS SPRAYED IN THE FACE BY A PUNK NINJA.

Cars were attacked and set fire! A power generator was knocked over and set fire. The fuel could have exploded!!!

One young man was severely beaten by a gang of around 10 people and was rushed to the hospital where he had broken ribs (VERY painful) and internal injuries.

Yet NONE of the “Love Trumps Hate” Lefty Liberal Lemmings intervened. No one said, “HEY MAN! Stop that! That’s not who we are!!!”

No, they just LET IT HAPPEN, and they SMILED! Or, they were simply oblivious thanks to the trance they were in from their chanting.

“Oh, but it's not fair to judge ALL of the protesters!” (I can hear it now)

Yes I can! Here's why. If you are going to take the moral high ground and chant, “Love Trumps Hate” then WALK YOUR STUPID TALK! Denounce the violent protesters, the ninjas, and Hollywood types that want to punch President Trump in the face. (Yea, I'm talking about YOU De Niro and Schwarzenegger!)

Sorry Lefty Liberal lemmings, who you are screams so loudly, we can’t hear what you are saying. YOU are the true DEPLORABLES! – Scott