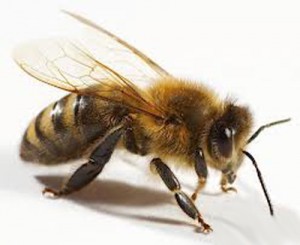 by FarOutRadio Featured Columnist Heather Callaghan.  And owner of Natural Blaze – republished from Natural Blaze. A first-grade field trip to one of the top-ten U.S. zoos led us to a prehistoric bee display. It was much bigger than my little fist. It was like a radish on top of turnip but dark brown with faded yellow stripes and fuzzy tarantula legs. It was so horrifying to think of encountering a giant killer bee with a 4-inch stinger during the time that dinosaurs roamed. What a first-grader wouldn't realize is that the display would have been a model, as there is a poor fossil record for bees, making it difficult to pin down the wipe-out of their ancestors.

What happened to those guys?

A fascinating new discovery about bees in prehistoric times actually sheds a lot of light on our current situation with massive bee die-off and colony collapse disorder. A vast majority of people are still under the impression that it will simply resolve itself; but really, we might be on the brink of an endangered era with already visible impact. Even an endangered classification for bees today would mean major ecological devastation.

A recent milestone: scientists for the first time have documented the mass bee extinction dated to have occurred 65 million years ago. It coincides with the huge event that wiped out the land-roaming dinosaurs and much of the flowering plant life.

This is still often called the K-T boundary – the end of the Cretaceous era and beginning of the Paleogene eras where a massive event like a meteorite or a series of events impacted the environment so immensely that plant-life died off, taking with it most of the non-avian dinosaurs.

Until now, due to the lack of fossil records, not much has been said about the bees of this period. Current amber-encased bees date to 45 million years ago. A study, however, led by Sandra Rehan, assistant professor of biological sciences at University of New Hampshire used a technique called molecular phylogenetics ("tribe origin") to analyze DNA sequences of four tribes of 230 carpenter bee species from six continents. This gives researchers insight into consistent patterns of evolutionary relationships like animals and plants.

In this study "First Evidence for a Massive Extinction Event Affecting Bees Close to the K-T Boundary," published recently in PLOSOne Journal, they combined the sequencing with existing fossil records so that they could also introduce time into the equation. This helps to discover data like how old the bees are, how they are related, and what happened when a particular family nearly vanished completely.

…the researchers were able to use an extinct group of Xylocopinae [carpenter bees] as a calibration point for timing the dispersal of these bees.

They were also able to study flower fossils that had evolved traits that allowed them to be pollinated by bee relatives of the Xylocopinae.

The data told us something major was happening in four different groups of bees at the same time. And it happened to be the same time the dinosaurs went extinct.

If you could tell their whole story, maybe people would care more about protecting them.

Understanding extinctions and the effects of declines in the past can help us understand the pollinator decline and the global crisis in pollinators today.

Study co-leader, Mike Schwarz, pointed to a lot of diversification among the bee family followed by stalled diversification followed by sudden increase in the four bee tribes, indicating an extinction event that could have completely wiped out other competitive bee species allowing remaining species to eventually rise again.

He delved into the important findings of the symbiotic relationship a particular type of flower and carpenter bee ancestors shared. Eucidot flowers originated around the same time.

There was a lot of climate change just before the K-T boundary that also resulted in a global loss of flowering plant species. Both would have affected pollinator numbers.

And for plants that have a close relationship with the insects, losing their pollinators would have magnified their own loss. It was a real double whammy.

He emphasized climate changes, whereas Rehan focuses on bee behavior, relationships and diversity. Admittedly, we have an attempt at modern-day, man-made climate change — atmospheric geoengineering. It has been suggested that the thick haze veiling the sun could have impacts on agriculture, not to mention the metallic residue fallout. Interestingly, part of the theory of the K-T boundary event(s) surrounds the idea that meteorite dust covered the sun and led to mass plant die-off.

My thoughts mirror the ones in Sandra's press release, "Indeed, the findings of this study have important implications for today's concern about the loss in diversity of bees, a pivotal species for agriculture and biodiversity."

Monoculture (versus polycuture and biodiversity) is increasing due to corporate biotech monopolies and large-scale farming practices. Genetic engineering starting in the mid '90s and various types introduced in the early 2000s allowed for extra mass pesticide spraying. While a lot of it worked for farmers in 2003, now survivor pests like corn rootworm are running rampant on their crops while "helper bugs" like bees and butterflies continue to die out. Those are just a couple factors implicated in the vanishing of the bees, scarily noticeable starting in 2006. Yet, polyculture and biodiversity are just one of the many methods to increase yields, nix pesticide use, and keep the biodiversity that will help bring back pollinator species.

What if these modern-day practices combine to form a less intense event, not so suddenly traumatic, that impacts the environment to the point of actually losing pollinator species in the near future? Will prehistoric answers help create action for today?

Heather Callaghan is a regular guest on FarOutRadio, a natural health blogger and food freedom activist. You can see her work at NaturalBlaze.com and ActivistPost.com. Like at Facebook.