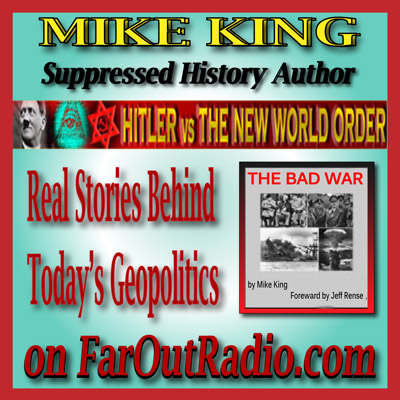 Listen HR 1 HERE.  HR 2.  Alternative historian Mike King is back with us for a fascinating look at today's geopolitics starting with The Real Story Behind World War II. For example, what does Hitler have to do wth today's New World Order or what is going on with Russia and power in the world??

The facts presented and discussed are based on many of Mike King's pictorial timelines including his book, The Bad War which can be purchased on his website TomatoBubble.com. As we all know, “history” is written by the victors, so might there be a few details that have been officially glossed over in the official history books? Mike King digs these details out!

We all know the story about World War II. The one about how "The Good Guys" banded together to stop Adolph Hitler and the big bad Germans (and Japanese) from taking over the world. There is just one problem with this official version of the history-changing event known as World War II. It's a LIE! Are you ready to know the TRUTH about what really happened?
–Mike King

This will be another sparkling conversation with the always interesting and thoughtful, Mike King.

You may enjoy Mike’s previous visits on Far Out Radio HERE.