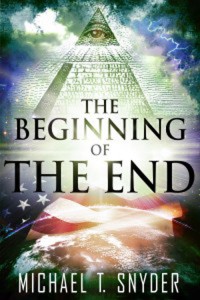 If you are a follower of alternative news, then you know that anything written by Michael Snyder is something that you shouldn’t miss reading. One of the most prolific bloggers of the genre, Snyder writes incredibly well-researched articles on his highly ranked websites The Economic Collapse Blog, The American Dream, and The Truth.

His work has been republished on nearly every respected website in alternative media and tens of thousands of people per day learn from his articles. When I saw the ads for his new book, The Beginning of the End, I was eagerly anticipating picking up a copy. When I saw that a friend of mine had already received his, I swiped it and immediately disappeared to begin reading it, not to re-emerge until the next day when I had finished the hefty novel.

Anyone who is a fan of alternative news will find themselves nodding in agreement throughout the book. The fast-moving plot manages to combine many of the most relevant issues of the day into one page-turning novel. I found some of the characters to bear a close resemblance to some prevalent internet figures, which made the plot all the more interesting. If you believe that evil forces are afoot, attempting to bring forth a one-world government through the auspices of the UN, then most of the plot will seem very realistic. On the other hand, if you are one to scoff at mentions of the Illuminati or global control, then this may not be the book for you. I particularly liked the way the book tied all the current themes of today into one package.

The book contains references to economic collapse, martial law, gun control, secret agencies within agencies, and ties between the government and the media. It explains from behind the scenes how the mainstream media is merely a tool of the government and big business. I also learned some history about the Illuminati that I hadn’t read previously.

The three main characters are interesting and diverse. Despite the initial naivete of two of them, I was pulling for them throughout the book. There was a really interesting “supernatural” theme threaded through the book which was a literary technique that some will enjoy, but others might find distracting. (I really liked it, personally). Snyder is a very religious man.

Unlike some of his contemporaries in prepper fiction, I was pleased that although the book bore the stamp of his personal beliefs, it was not distractingly “preachy” or evangelistic. He added a well-written section at the end in which he explained his beliefs, where readers can opt to continue or not without missing parts of the story. I read this book from cover to cover within a day. It’s a must-read for any alternative media fan!

Because I enjoyed the book so thoroughly, I found very few cons. I was an English Literature major in college and there I learned that dialogue is the hardest part of writing fiction. In this, Snyder’s first fiction effort, I found that to be the case too. The dialogue is a bit stiff in places and the author’s personal compunction against swearing made some of the conversations of the “bad guys” seem a little bit unrealistic and stilted. As mentioned above, there are some supernatural elements in the book, and this may not work for some readers who are merely looking for a realistic portrayal of the American economic crisis. **** This book is a real page turner for preppers.

The Kindle price is an incredible $3.99 – a small price to pay for such an enjoyable compilation of current events with an alternative media twist. I strongly recommend it. I sincerely hope that Michael Snyder writes a sequel because I’m dying to know what happens during the next leg of the adventure!

You may read more reviews and purchase the book on Amazon, HERE.

Daisy Luther is a freelance writer and editor. Her website, The Organic Prepper, offers information on healthy prepping, including premium nutritional choices, general wellness and non-tech solutions. You can follow Daisy on Facebook and Twitter, and you can email her at daisy@theorganicprepper.ca – See more at: http://www.theorganicprepper.ca