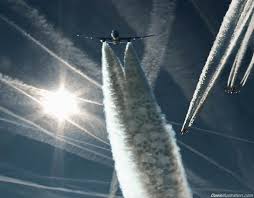 by Christina Sarich, as republished from Waking Times.  You already know about Snowden unveiling the secret of heavy government surveillance via the NSA and CIA on its own people, but the whistleblower has released another information bomb that will make chemtrail watchers and suspects of the ‘conspiracy’ of a eugenics program sit up and listen.

According to Snowden, chemtrails are part of a ‘benevolent’ program to stop global warming. By cooperating with jet fuel manufacturers (and though he doesn’t say this, likely branches of the military) the government has been spraying the skies with chemicals in order to keep us from severe draught and other weather patterns which would cause famine in large swaths of the United States.

But here’s the biggest shocker – with cooperation from Monsanto, a secret geo-engineering lab was set up, known by insiders as the ‘crown jewel’ or Muad’Dib. This lab has been operating since the 1960s without the knowledge of the people.

Climate change is a big threat to Big Ag, but is this part of another smear campaign to hide deeper truths about what chemtrails are doing to us all? There is no doubt Monsanto is capable of something like this, but is this just a government attempt to address what is becoming exceedingly clear to more people all the time – that our skies are full of poison trails, that aren’t contrails at all?

Snowden has supposedly gone on record to say, “I am only revealing this program because there is no oversight in the scientific community, no public discussion, and little concern for the side-effects which are well known only to a few privileged people interested in continuing the decades-long chemtrail program in secret.”

Snowden also stated that the Maud’Dib program was set to go forward at all costs – even if it meant accelerating desertification in African or spreading carcinogens over countless people in populated areas. Scientists even predicted many of the side effects we are seeing now, including droughts in the Amazon and windstorms throughout the East Coast. Snowden shared documents through The Internet Chronicle, which has also published rumors of his supposed suicide. Names of scientists were not disclosed in order to prevent them from being targeted by our governments or foreign counterintelligence. According to Snowden, if chemtrails were stopped, the scientists behind the program believe that our climate would spiral out of control.

Deciding whether or not you believe Snowden’s story is up to you, but the mere unveiling of a reason behind chemtrails means that someone noticed we are noticing. The ‘additives’ being released by even passenger planes now have been filmed across the world by people in countries as varied as Australia, Europe and Asia. From California to Michigan, we aren’t the only ones being sprayed. The true reasons behind chemtrails and geo-engineering are probably yet to be completely disclosed.

Christina Sarich is a musician, yogi, humanitarian and freelance writer who channels many hours of studying Lao Tzu, Paramahansa Yogananda, Rob Brezny,  Miles Davis, and Tom Robbins into interesting tidbits to help you Wake up Your Sleepy Little Head, and See the Big Picture. Her blog is Yoga for the New World. Her latest book is Pharma Sutra: Healing the Body And Mind Through the Art of Yoga.