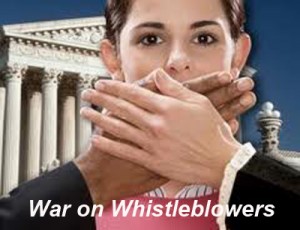 by James Corbett as republished from BoilingFrogsPost.com.  If there is one thing that defines our current political era, it is the unprecedented crackdown on government whistleblowers. If the Bush administration’s invocation of the little used State Secrets Privilege to silence those exposing corruption is taken as the beginning point of this era, we have seen a steady progression throughout the past decade, culminating in Obama’s unprecedented war on whistleblowers.

As we have explored previously on The Eyeopener, the Obama DOJ has been relentless in its prosecution of those seeking to shine the light on government fraud, abuse and criminality. In his first five years in office alone, he has charged eight whistleblowers under the Espionage Act of 1917, more than all other Presidents combined.

And for those brave souls who do stand up to government abuse and manage to survive the seemingly inevitable court battles and legal challenges, the toll on their career and personal finances is just as severe.

Take Thomas Drake, the NSA whistleblower who was himself charged under the Espionage Act and eventually convicted of a misdemeanor charge. Stripped of his security clearance and blacklisted in Washington, Drake has been reduced to working at the Apple Store, where, according to reports, he once served Attorney General Eric Holder as he went shopping for an iPhone.

Or take Richard Barlow, the CIA intelligence analyst who blew the whistle on the high-ranking American government officials who were tipping off nuclear proliferation suspects about FBI stings and helping them to ship important nuclear weapons technology to Pakistan. He was fired from a position at the DoD after raising concerns about how his reports on Pakistan’s nuclear capabilities were being altered by his higher ups. Despite being called “one of the most brilliant analysts I’ve ever seen” by the State Department inspector general and being vindicated in a 1997 IG ruling that restored his security clearance, his career was scuttled and his family torn apart by a systematic campaign to smear his name and disrupt his marriage. The campaign worked; Barlow was unable to continue working as an analyst, his marriage ended in divorce, and these days he spends his days flyfishing and bird hunting with his three dogs, by his own estimate living perpetually one month away from homelessness.

Sadly, these stories are not the exception in the annals of modern-day whistleblowers; they are the almost-universal rule. In fact, as Sibel Edmonds has demonstrated from her own personal experience, whistleblower organizations are actively sought out and bought off by the influential corporate foundations almost as soon as they appear. In a 2011 interview on Global Research TV, she explained her own experience forming the National Security Whistleblowers Coalition to bring together whistleblowers in their own, independent organizaiton.

So what, then, are we to make of whistleblowers who are not only not prosecuted for their actions, nor simply given fawning mainstream media attention, but receive book deals worth millions of dollars and become the heroes of Hollywood action flicks?

Ambassador Joe Wilson and his wife, Valerie Plame, have become mainstays of the Democratic party machinery and its propaganda apparatus ever since Wilson penned an op-ed in the New York Times criticizing the Bush Administration’s false WMD claims in the lead-up to the Iraq war and Plame was supposedly outed as a CIA operative in apparent retribution. But as we’ve examined in recent weeks on The Eyeopener report, that official “Plamegate” narrative is fundamentally flawed. Plame’s cover was not blown by Richard Armitage in 2003, but by State Department official Marc Grossman in 2001 when he tipped off his Turkish contacts about the real nature of Brewster Jennings as a CIA front.

The case is perplexing, and poses an intriguing set of questions. Why have the Wilsons never publicly mentioned Grossman’s role in Plame’s outing? Why did they raise no objection to Special Counsel Patrick Fitzgerald’s sham investigation into the affair that didn’t convict anyone of actually “leaking” Plame’s identity? Why have they remained quiet on the real nature of the Plamegate affair for so long?

Although the questions seem at first inscrutable, a dark possibility is suggested by the fact that, according to Washington sources, the Plames are long-time friends with Grossman. In fact, Joe Wilson and Marc Grossman were even roommates in their college days in California.

So has anyone ever put the question of Grossman and his role in the affair to the Wilsons? In fact, one person has. Matthieu Verboud was one of the producers of Kill The Messenger, a groundbreaking French documentary into the Sibel Edmonds story. During the course of putting that film together, Verboud had the chance to interview Ambassador Wilson, and he did try to raise the Grossman issue, to no avail.

Once again, one of the most fascinating aspects of the real Plamegate scandal slips through the fingers of investigators.

Taken individually, each aspect of the Grossman / Brewster Jennings cover-up is puzzling: Why did Patrick Fitzgerald pursue a sham investigation into a matter that was already solved before that investigation even began? Why did Judy Miller go to jail to protect a source in a story she never wrote when the trial that launched her own proceedings was itself a sham? And why do the Wilsons continue to secure multi-million dollar book and movie deals that consistently flop even as they are trotted out as guest experts to recount the false narrative of Plamegate yet again?

Taken together, the actions of all of these people seem to point in the same disturbing direction: namely, toward a concerted cover-up of a nuclear espionage ring that has help from some of the highest-ranking US officials. And all roads point directly to Marc Grossman, who has never been asked directly about the case.

And of the two people in the world best situated to blow this remarkable story wide open, Ambassador Wilson and Valerie Plame, neither one has addressed this issue, nor seems likely to in the foreseeable future. Valerie Plame was contacted for an interview through her publicist for this video series, but did not respond to that request.

James Corbett publishes the popular The Corbett Report. The site is an independent, listener-supported alternative news source that operates on the principle of open source intelligence and provides podcasts, interviews, articles and videos about breaking news and important issues from 9/11 Truth and false flag terror to the Big Brother police state, eugenics, geopolitics, the central banking fraud and more.