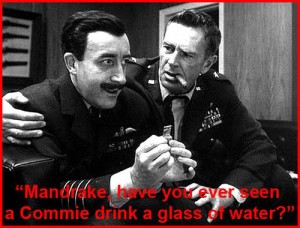 In the story, the actor, Sterling Hayden's character, the crazed Air Force Brigadier General, Jack D. Ripper, decides on his own that Russia needs to be nuked and sends authorization for a first strike. While the stuff is hitting the fan (there’s a siege going on at the Air Force base) , Ripper has a strange conversation with his assistant, the very nervous British officer, (played brilliantly by Peter Sellers – one of three characters he played in the film) Group Captain Lionel Mandrake. The General, in a very deranged state, blathered on about all sorts all things, the FLUORIDATION OF WATER and how it’s a dirty Commie plot! He warns his stymied assistant that the Commies are using fluoridation of water to pollute the “precious bodily fluids of Americans.” (and in doing so, polluting our minds as well – Scott).

“Mandrake, have you ever seen a Commie drink a glass of water?” asks Ripper. “Well, I don’t say I have.” answers a VERY nervous Col. Mandrake. And General Ripper goes on from there. Enjoy the clip…

I just about fell off the sofa! Stanley Kubrick KNEW about water fluoridation back in the early ‘60s when he was writing the screenplay!

What’s so unfortunate is that because General Jack D. Ripper’s character and performance is so BAT SHIT CRAZY, what he was saying sounds like LUNACY and was most likely dismissed and completely ignored by most viewers when the movie first came out. “Crazy talk!” is probably what nearly everyone thought.

One of the things Jay Weidner points out in his talks about Kubrick’s films is that Stanley had an IQ of 200 and just about EVERYTHING in his films is there for a reason. What was Stanley trying to warn us about in this and every scene? Now that you know that, you will never watch a Stanley Kubrick film the same again. – Scott

Jay Weidner’s book:
“The Mysteries of the Great Cross of Hendaye: Alchemy and the End of Time”

Kubrick's Odyssey II: Beyond the Infinite Secrets Hidden in the Films of Stanley Kubrick 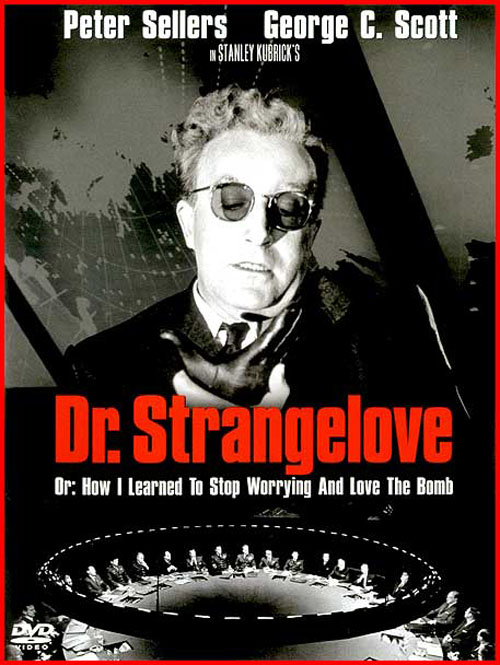 Called by Wired Magazine an "authority on the hermetic and alchemical traditions," and "erudite conspiracy hunter," Jay Weidner is a renowned author, filmmaker and hermetic scholar. Considered to be a ‘modern-day Indiana Jones’ for his ongoing worldwide quests to find clues to mankind’s spiritual destiny via ancient societies and artifacts, his body of work offers great insight into the circumstances that have led to the current global crisis. He is the director of the powerful and insightful documentaries, Kubrick's Odyssey, Infinity; The Ultimate Trip, and the forthcoming feature film, Shasta. He is also the producer of the popular documentary films, 2012 The Odyssey and its sequel, Timewave 2013.

Jay was featured in the History Channel’s documentary, The Lost Book of Nostradamus and was associate producer and featured in the History Channel’s special, Nostradamus 2012, and also in Brad Meltzers, Decoded. He also participated in Jesse Ventura's, Conspiracy Theory for TruTV. In addition, he is the co-author of The Mysteries of the Great Cross of Hendaye; Alchemy and the End of Time, (Destiny Books) and A Monument to the End of Time (with Vincent Bridges), as well as a contributing writer for the book, The Mystery of 2012 (Sounds True).

Scott Teeters is an alternative news enthusiast who searches the net for the most informative and far out articles and news to post here on FarOutRadio.com. He is an author, artist, radio host, blogger, website designer and developer. Check out his radio interviews and other blog posts right here on FarOutRadio.com. You may republish this article in full. Just make sure you list this paragraph and provide a link.