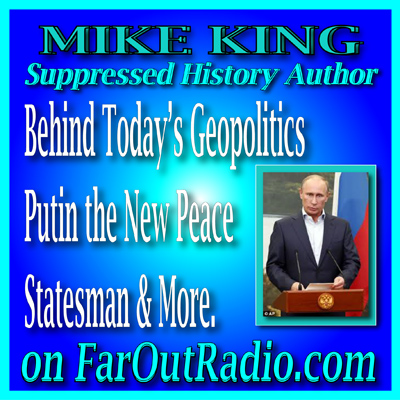 FarOutRadio Program. Listen HERE. Alternative historian Mike King is back with us for a fascinating look at geopolitics starting with today's headlines – leaders and the institution of war. What war games are these so called statesmen getting ready to play? The strategies don't seem to take into account the needs of the everyman. Listen in for the real stories behind war and world dominance.

The facts presented and discussed are based on many of Mike King's pictorial timelines including his book, The Bad War  which can be purchased on his website TomatoBubble.com. As we all know, “history” is written by the victors, so might there be a few details that have been officially glossed over in the official history books? Mike King digs these details out!

We all know the story about World War II. The one about how "The Good Guys" banded together to stop Adolph Hitler and the big bad Germans (and Japanese) from taking over the world. There is just one problem with this official version of the history-changing event known as World War II. It's a LIE! Are you ready to know the TRUTH about what really happened?
–Mike King

This program we discuss many intriguing topics such as, Russian power, Putin, Franklin Delano Roosevelt, Winston Churchill, Joseph Stalin,  Mussolini, the Axis, the Allies, General Eisenhower, International Bankers and what is happening in today's headlines – the suppressed history benind it all.

This will be another sparkling conversation with the always interesting and thoughtful, Mike King.

We recommend you visit Mike's site for intriguing pictorial overview history lessons with leading characters from the power group that oversees the new world order.  TomatoBubble.com.