Stuff that Carlin DID say

as republished (just part of the whole article) from georgecarlin.net

editor's note – Scott Teeters, our FarOutRadio host and producer often quotes one of his favorite people of all time. And that is the late great George Carlin. Here are a few of George Carlin's genuine quotes as republished from georgecarlin.net. Enjoy.

"Despite all the bogus George Carlin quotations floating around the internet, there are of course plenty of real ones too. Unfortunately, people rarely ever supply the precise source of the quotation ( the name of the Carlin album, or book, or HBO special, etc. that the words are taken from), making it difficult for casual Carlin fans to distinguish a fake quote from a real quote. Sometimes the wording of a quotation is significantly off, too. Most of the time I'm able to immediately recognize a genuine Carlin quote when I see one and tell you where it's from, but other times I need to do some digging to verify it.

Here we focus on some of the more popular Carlin quotes that show up on the internet (to make it easier to verify a genuine quote when you see one), and a few favorites." 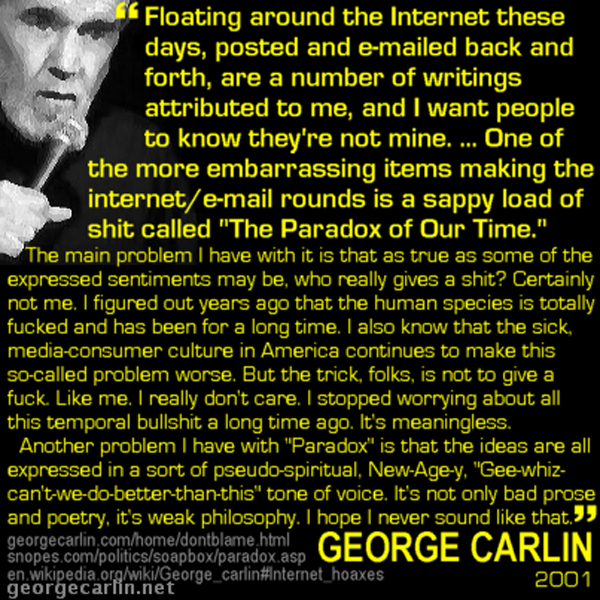