Dateline: 3.7.16: Frank Joseph is back with us this evening. This is Franks 13th visit and we've talked about all kinds of fascinating, far out topics, including ancient history, the Coming Ice Age, World Wars I & II, Atlantis, the time BEFORE Atlantis, the Lost Colonies of Ancient America, and more.This time, we're going someplace that's entirely different.

Dolphins are arguably the most amazing animals on the planet and some of the smartest – perhaps THE smartest! There are countless “dolphin miracles” stories that are absolutely mind blowing. Many feel that dolphins and humans are related spiritually. People stranded in the ocean have

END_OF_DOCUMENT_TOKEN_TO_BE_REPLACED

ATLANTIS & the Coming Ice Age, What Edgar Cayce & Plato Had To Say About The Past & Future, Frank Joseph
Frank Joseph is back with us. Bear & Company just released Franks revised and expanded edition of his 2010 book,  “Atlantis and 2012” with the new title, “Atlantis and the Coming Ice Age.” Considering the winter most of America just suffered through, how timely is that?

END_OF_DOCUMENT_TOKEN_TO_BE_REPLACED

Now on YouTube. Frank Joseph is back with us this program. Frank has been with us many times before. In his last visit on August 25th we talked about his book, “Before Atlantis” which is a fascinating look, way WAY back in history. Frank has authored at least 20 books about ancient history and he’s the former editor of Ancient American Magazine. He’s also written on the topics of WW I and WW II.

Frank is hard at work on a new book that will be out in the Spring of 2015 – “Atlantis and the Coming Ice Age". That is, IF we have a spring this coming April. Just last week weathermen were predicting “THE RETURN OF THE POLAR VORTEX!” Remember last winter when at one point during that harsh, harsh winter EVERY state in the union (except for Hawaii) had snow on the ground in some part of the state?

END_OF_DOCUMENT_TOKEN_TO_BE_REPLACED

Everyone knows that Columbus discovered America, right? That may well have been what we were all taught in school, but nothing could be further from the truth. The evidence is overwhelming that there not only was a thriving civilization in North America when the Europeans arrived, but there had been peoples here long before even the natives of Columbus’ time were here.

END_OF_DOCUMENT_TOKEN_TO_BE_REPLACED 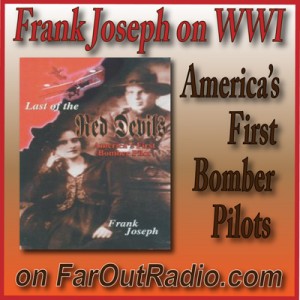 FarOutRadio Program. Listen Hour One HERE. Hour Two HERE. This program, Frank Joseph returns to discuss a piece of forgotten history. What was it like to be a bomber pilot during World War One? From Wikipedia: "World War I was the first war in which aircraft were deployed on a large scale. Aeroplanes were just coming into military use at the outset of the war. Initially, they were used mostly for reconnaissance. Pilots and engineers learned from experience, leading to the development of many specialized types, including fighters, bombers, and ground-attack aeroplanes."

Frank Joseph describes the experience from his book Last of the Red Devils: "Sit in an open cockpit, wind in your face, and fly over enemy territory in the flimsiest of aircraft. Experience the joy, love, pathos, and tragedy of World War I as seen through the eyes of a young American in France at war.